Our one night stand with San Juan del Sur

San Juan del Sur is yet another destination that has been deemed a regular stop along the Gringo Trail, in my honest opinion.  Places like this have long crossed the fragile boundary between a positive tourism effect and over tourism with the town that it interacts with.  What once was a small, quiet fishing village has become a popular tourist destination that offers surfers, beach bums, and tourists from all walks of life a chance to be themselves completely without any fleeting attempt of immersing themselves into Nicaraguan culture.  San Juan was not supposed to be our end destination, but as fate would have it we wound up stuck there for the night.

Immediately upon arrival young men scrambled to get our bags off the roof and demanded that all tourists needed to pay before receiving their bags.  It was not the monetary value that left a sour taste in my mouth, because 2 dollars was not going to bust our piggy bank.  It was just the principle alone that rubbed me the wrong way.  This was the only place in Nicaragua where this new tariff was the norm.  I couldn’t find an opportune moment to climb up myself and eventually gave in to paying half the price they stubbornly sought out.  We were trying to get to a different beach called Playa Maderas, which sounded perfect for us; an isolated beach that was more laid back with the option of tent rentals under the stars (how romantic).  When we asked about transportation options, we discovered transportation would cost 5 bucks per person each way.  Since we only had 1 night available in our itinerary, this would skyrocket the cost of for a night to about 30 dollars, which takes all of the fun out of camping altogether.  Quickly, as usual, plans changed.

The owner of a new hospadaje had given us basic instructions to his house while we were getting ripped off at the bus stop.  We immediately began looking for this house, but got lost due to vague directions.  While we were looking a woman offered us a room in her house.  She made us wait for 5 minutes while she tidied up her daughters bedroom, complete with little girl bedding, posters, and toys.  We politely passed on the offer and continued our search until we found our casa and settled in.

Since we were back on the coast we both wanted our toes to soak in the salty ocean once again.  We made our way to the beach’s tranquil cove, which was stunningly sheltered by two massive headlands, and ran into the warm, gentle surf.  Within 20 seconds I felt a very sharp pang in my foot, and realized that I had stepped on a small stingray.  Blood came pouring out of a tiny incision in my right foot and eventually began throbbing with every step/heartbeat/breath.  Foiled again.  I limped back to our house, but not before buying an entire Tuna for 2 dollars. 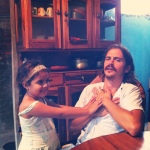 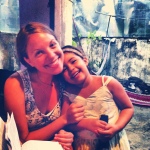 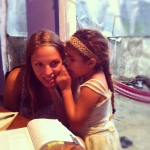 Our family immediately helped ameliorate the pain by keeping a pot of water boiling for my aching foot.  They couldn’t have been sweeter to us.  Their daughter was about 5 years old and probably the cutest Nicaraguan on the planet.  We practiced Spanish with her while we played with toys, iPhone cameras, and pretended we were all hairdressers.  Eventually the pain subsided and we made a smashing meal.

Just outside of the touristy beach scene the town itself is a very local, authentic, and has a that quintessential small town pace.  The wet streets at night glistened in the gentle rain while elderly women in rocking chairs swayed in the soft glow of their television sets.  We wandered around for a while and plotted our escape to Ometepe for the following morning.  We got up at dawn,  left our awesome little family house in San Juan, and were en route to Nicaragua’s most famous volcanoes.