We Belize in Caye Caulker 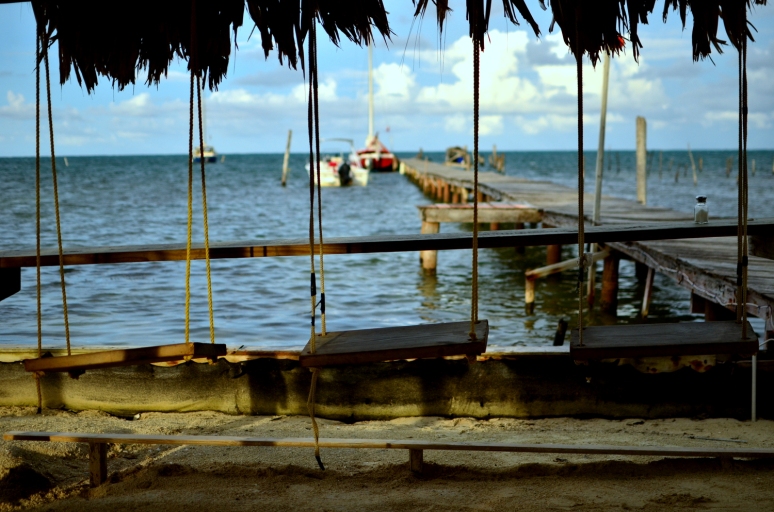 At approximately 4AM on a Friday morning we rolled into the border between Mexico and Belize on an overnight bus destined for Belize City.  Overnight bus rides are a strange experience encapsulated by an existence between a half-concious state of mind and very, very light sleep.  Any bump along the road reminds you how uncomfortable your position is and how much your neck is craning and straining to hold itself up while you helplessly reach for dreams.   It’s entirely annoying to realize that your mouth always finds itself wide open no matter how much effort is exerted to keep it shut.  Immigration was a complete joke.  We weren’t asked questions, we didn’t give answers, and we just received stamps.

Around sunrise we rolled into a beat up, sun bleached, washed out town and stepped down onto the busted asphalt of Belize City.  Morning arrivals in these conditions never feel comfortable or normal.  A strange new place presents itself to weary and tired eyes with the same intimidation a police officer has when you get pulled over for speeding.  Belize city is a notoriously dangerous place for travelers and residents alike.  Problems with drugs, gangs, and robberies are a common occurrence here and it also has the highest murder rate in the whole country.  Most residents find themselves indoors with the doors locked around 6pm nightly, knowing there is nothing outside worth the annoyance of petty theft or armed robbery.  We followed a man speaking a weird form of Carib English over to the docks to catch the first Ferry to Caye Caulker. 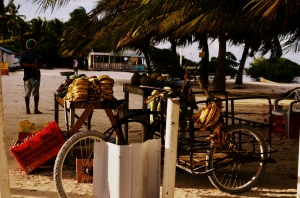 There couldn’t have possibly been more people aboard our fiberglass vessel on route to the key east of the Belizean coast.  The air was humid, almost chokingly warm as the hull slapped down across the waves of the shallow sea. Visions of a tropical haven floated in our heads while we all slowly fell into a heat induced nap.  I kept thinking that there must be some sort of treat at the end of this path, especially given all that we’d been through to get there.  After unloading we were in a half dazed state of mind wandering around the island looking for some cheap digs to plant ourselves in.  We trudged around aimlessly with our packs anchoring our feet to the gray lime mud sand until a local purveyor brought us to a hotel that he promised would give us the best bang for our buck.  He tried to persuade us to his bar later for drinks to no avail.

After dropping our extra weight we explored the entire tiny island finding out that beaches didn’t really exist except for one at the split.  The split was a tear through the center of the island made by a hurricane that resulted in a channel cutting through to the other side.  The clear blue water had a visible current and glistened in the sunshine while snorklers were exploring the view below.  The beach appeared to be man made.  There was a bar hovering on top of the small sandy spit housing all types of vacationers getting sauced in broad daylight.   The pace of the land was slow and easy, and this was heavily enforced by local citizens who caught you walking too fast.   A soccer field in the middle of the island filled up at night with kids and soccer leagues practicing for matches against other towns.  The young girl who ran our hotel played in this league.  She was as kind as any person could ever be and very interested to hear about what it’s like to live with snow in the wintertime.  Children wandered about carefree in this island town, not worrying much about any dangers or threats that Belize city kept to itself on the mainland. 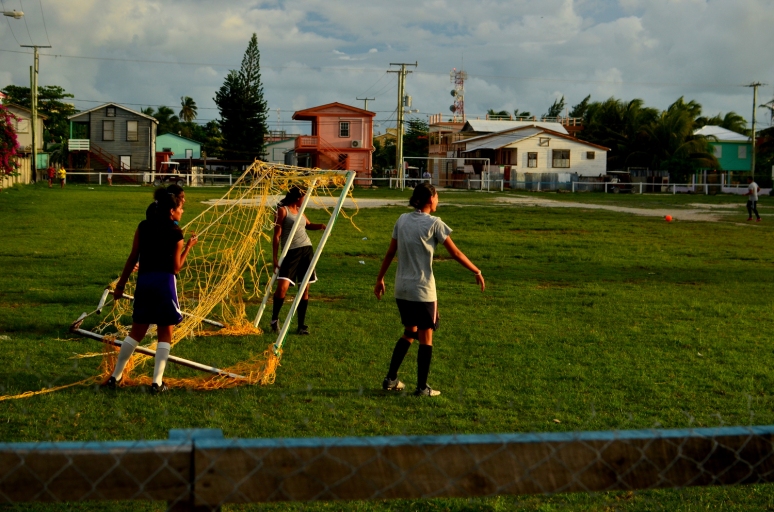 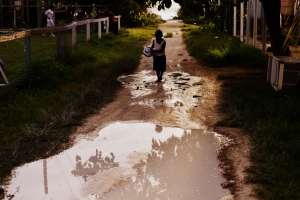 The reason for our trip out the Caye was to find Juni, a guide we had heard about from our Aussie friends Tom and Claire (http://tomclaire.blogspot.com/), who was supposedly an aquatic version of the dog whisperer.  They told us of their tale with Juni, an island native, who would attract fish like he had raised them himself.   Moments after we arrived we found out Juni had left the Island that morning for the states and may have even got off the first ferry that we boarded.  Flustered, we found another outfit and agreed to meet up the next day for a whole day’s worth of snorkeling in the 2nd biggest reef in the world.  Realizing we were going to be dropping about 90 bucks doing this we scouted the island for cheap food, but alas, it seemed devoid of any.  Life on the island could be described as quiet.  There was a bakery, a place to buy breakfast wraps, a gentlemens’ club with papered windows and slot machines, and a wide variety of ex-pat and local restaurants.  There was a super relaxed island vibe and super inflated island prices, for us backpackers at least.  A cheap Creole meal with the “budget man” turned into a $7.50 lunch that left us both needing something else. 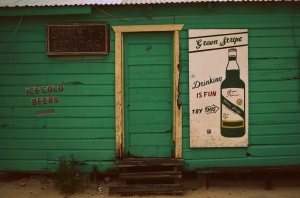 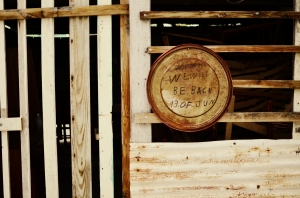 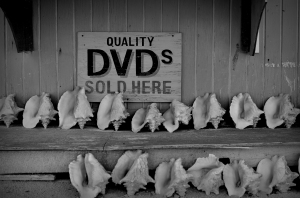 The next day we got up and set off on the tour ready to get our feet wet and see reef life first hand.  On the dock we were standing in the middle a conversation between retirees from Arkansas and teachers from Wisconsin, engaging in some seriously mild chit chat about America.  The distance between their version of the world and ours was a universe apart.  Eventually one of them asked us what we were doing, and we enthusiastically stated we were trying to backpack to Brazil.  “Oh, neat” was the response right before U-turning the conversation back to life in the states.  Shrugging off the differences between lifestyles we boarded our boat with a younger crowd and set off into the lagoon. The reef break could be seen to our right as we headed north towards our destination at Hol-Chan Reserve.  Our guide had a degree in marine biology and years of experience protecting the reef with the conservation police. He knew how to safely interact with the aquatic life without causing harm.  After tying off onto a buoy we flopped off the boat and into a whole new world.  Large groupers instantly came to the boat knowing that if they played along they would get treats from our guide.

We took off with about a dozen fish in tow through the sea-grassy waters.  Sea turtles  were approached from a distance so we could silently watch them scour the sea floor for sustenance.   After spotting a moray eel our guide lured it out of it’s cave with a conch shell baited with food exposing it’s entire slithery body.  Just beyond the edge of the reef shelf the depth dropped about 10 meters and gave shelter to all different types of sea life.  A huge eagle stingray was lurking at these depths and giant clusters of coral were teeming with schools of shiny fish.

Our next stop was stingray and shark alley.  Our boat pulled up and was instantly swallowed up by a small, rowdy crowd of nurse sharks, large manta rays, and eager fish.  We played around for about half an hour petting the somewhat domesticated creatures that reached up to about 2 meters in diameter and length.  It’s quite an experience letting a full sized nurse shark swim beneath your fingertips from nose to tail.  Our last stop was in a coral garden where we roamed freely in the shallow barrier reef zone near the break.  The highlight of this swim was seeing a chameleon flounder that was perfectly camouflaged with the rocks it was perched on.  We didn’t want to leave this gorgeous, interactive fish tank but eventually we were back on the island looking at another stunning sunset. 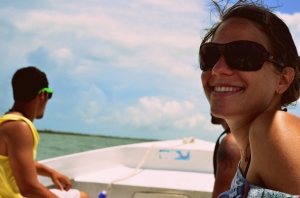 Island storms roll in an out of life on Caye Caulker and eventually get washed away by the sun.  We spent hours watching the storms roll in, turning into a swirling barrage of rain and wind.   Rainstorms for me are just like reading a good book.  They grab my entire being and I can’t put a good one down.  The heavy winds carrying quarter sized drops make everyone stop life, seeking shelter to wait out the unavoidable washout.  When the water disappears and the sun shows it’s face again everything feels fresh and new, like spring just arrived.  After one particularly fantastic storm, I took a stroll and let my feet hang in the water off a dock watching fishermen preparing their freshly constructed wooden lobster traps by submerging them into the water.  We had arrived too early for langosta season and there was going to be a huge party about 2 weeks later to celebrate (can’t win them all).   The rain also brought a force of relentless island mosquitoes that bred in the small puddles sprinkled all over the island.  They were after blood.  These insanely fast creatures covered us while we tried to enjoy a sunrise on our last morning.  We were forced to run through paths between residents’ yards and houses,  swatting at the winged devils and cursing their existence. 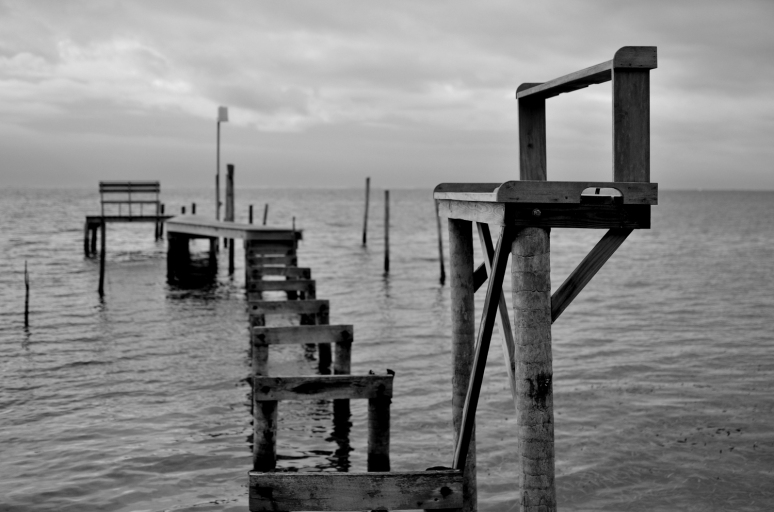 One last huge storm graced us with it’s presence the morning before we boarded the ferry.  The rain came down for 3 hours straight, only stopping minutes after the ship set for land.  A couple we had dinner with a few nights prior were sitting right across from us and we began to share stories about our island adventures.  Sam and Kristina were from San Francisco on a 2 week vacation through Belize.  They had reserved a rental car from the airport for transportation.  After parting at the dock they turned and invited us to join them instead of busing it around Belize, which we naturally were pumped about.  Within minutes we were all getting properly acquainted in a taxi en route to the airport in preparation for discovering what else Belize had to offer.

12 thoughts on “We Belize in Caye Caulker”