We left bright and early from our hostel in Flores at 6 AM, leaving behind the cobblestone streets of Flores with a big yawn.  A shuttle van partnered up with all the hostels in town and picked up other weary backpackers before setting off.   Luck was on our side for this 9 hour travel day because there were only 2 other people heading to Semuc.  Booking shuttles through hostels can be a tricky situation in Guatemala because they all offer the exact same shuttle at different levels of prices, depending on how big of a commission they include for their booking.   It’s normally best to walk directly to an agency and book a trip but in our case the hostel somehow offered the best price.  We set off on our hot, sweaty trip with a Canadian neighbor to the north and another man from Holland, chit chatting about travel while miles of flat corn fields held their ground.  Tiny bustling ramshackle villages would suddenly appear out of no where in front of our 20 year old banged up shuttle bus.  Our van would stop weaving around cows and horses in the country side and start parting a sea of Guatemalans in the midst of their routine morning markets.  Food, clothes, bags, belts, animals, and tools were all being sold and traded while our white metallic can would slowly pass eyes momentarily transfixed on us.  At the edge of these rusted aluminum roof congregations the land would open up once again to vast open fields.  Streams passed along the way were occupied by families washing laundry by hand in the muddy moving waters.  It was amazing to see their white dresses and shirts were somehow cleaner than mine giving the circumstances. 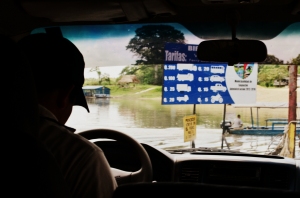 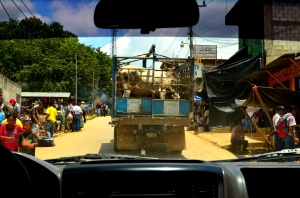 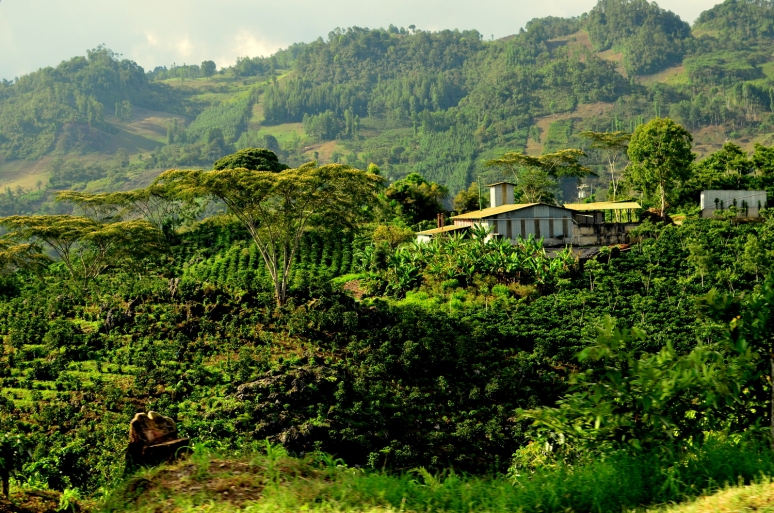 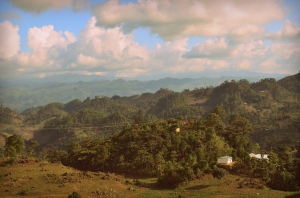 We forded a river on a small barge at one point going from one river village to another, just a another obstacle to get closer to our destination.  Roads began climbing up hills and into the mountains.  The roads often became a bit treacherous, leaving just one lane open adjacent to a landslide scarring the hillsides.  Speed bumps seemed to be placed randomly along the way on this stretch of asphalt and we must have crossed over 100 on this leg.  Our shuttle driver stopped for lunch near Coban, where we were given the standard tourist menu (twice the price, less food).  A transfer soon after packed us into another shuttle with more people destined for Lanquin. 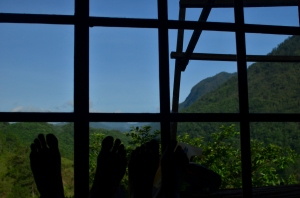 The approach to Lanquin was stunning to say the least.  The mountainside country farms, the beautiful valleys, trees, rivers, and animals looked as if they were meticulously painted onto a lush, live canvas.  The asphalt eventually ended after an endless ascent and we began traversing down a tiny, gravel road that hung onto the side of the mountains for dear life.  I was amazed when a chicken bus was coming the other way and we managed to squeeze two vehicles side by side on the cramped pass.  After about an hour of stunning views topped off with a sunset we arrived into a tiny Mayan town finishing up their day.  Our destination was the Zephyr lodge, which we knew was another notorious tourist trap with the ever-clever tab/spend tons of money in our hostel system.  The hostel was planted in the most beautiful setting a hostel could possibly be.  The thatched roof center was perched on top of the ridge of a hill with nearly 300 degree mountain valley views complete with a pristine stream flowing through the middle.  We came prepared and equipped with experience, so we checked in and instantly left to spread some money around town.   Knowing about the price differences between booking things through a hostel and the DYI approach we set up free transport to Semuc Champey the following morning as part of a hostel transfer deal to El Portal, right at the mouth of the park.  We had very little interest in doing the usual caving portion of the park, partly because tours don’t do it for us and partly because it more than tripled the cost of the entrance to Semuc on our own accords.

Semuc Champey is a geological anomaly created in a pristine setting amidst highland jungle forests deep in southeastern Guatamala.  Words are going to be hard to use to describe the attraction but I’ll give it a stab.  The literal translation of Semuc Champey is where water disappears.  Picture crisp, cool shallow teal blue translucent water, with fish and submerged logs to walk on that are fed by small little mountain streams collecting rainwater.  Next imagine little waterfalls that overflow from the lip of each set of pools collecting into larger pools downstream.  Now please imagine, if you can, upstream from the falls where a roaring, powerful, and deadly river disappears underground in a dark, ominous cave below the pools that people are playing and swimming around in.  The two sources of waters converge at a larger set of falls downstream and return back to a normal river system.  Now set this amazing network of rivers and caves in a thickly covered, mossy forest with a mirador looking down upon the entire scene and you have the beauty that is Semuc Champey. 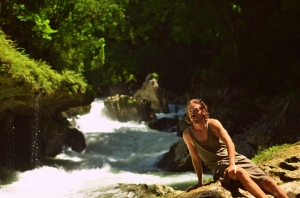 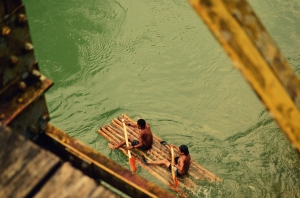 We chose not to do a tour and instead pay half the price to walk around this park all day on our own, a far better choice for budget travelers who don’t like the fast pace of group guided tours.  The waters offered a peaceful solace to the brutally sticky heat of the air and the day was wasted playing, splashing, and snapping pictures.  As a kid I grew up with streams and ponds to play in and couldn’t picture a better way to melt the whole day away.  Flocks comprised of hundreds of agile black birds would echo up and down the gorge as they flew past the thickly forested vertical walls.  This felt like nature showing off.  All I could offer was my own confusion.  I think my old friend Jack said something along those lines before.

A quick night’s rest got us up at 5AM for our shuttle transfers out of Semuc and towards San Pedro, Lake Atitlan.  We hopped into the back of a pickup truck with a Mayan Family hitching a ride and watched the sun come up through the foggy mountains with them.   They were headed into town for the market, and we were headed out of town forever.  We knew it was going to be a 10-13 hour travel day, but it was one of the unavoidable pains of traveling through Guatemala, a right of passage so to speak.   As we climbed up the steep, windy mountain rode I tried to take in every single detail of the cloud covered valleys and the mountain peaks of this postcard perfect land. 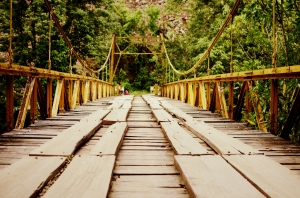 16 thoughts on “9 hours to Semuc Champey”