At this point in our travels you would think we have learned our lesson about 2nd class bus stations in developing countries.  But alas, we naively believed that if we got to the bus station by 2 we could be in Granada (only 4 hours away in a traffic free world) by sunset, enjoying a nice meal outside while leisurely sipping on a mojito.  En route to the station, our teenage bike taxi peddler dropped us off on the outside of the market and instructed us that it would be easier to walk through than for him to bike around.  Bueno.  We carried our bulky bags through the narrow, dark isles trying not to knock over fruits, veggies, and knick knacks before finding the next bus headed for Granada.  We waited for about 40 minutes in the profusely hot box on wheels with the promise of leaving in “cinco minutos” many, many times.  When the driver started closing all the windows on the already feverishly hot human transport container due to an approaching storm, we gave up and sought out a more expensive collectivo instead.  2nd class buses also tend to take a hell of a lot longer when you add in every one of the hundred stops they make to pick up and drop off passengers.  But regardless, off we were. 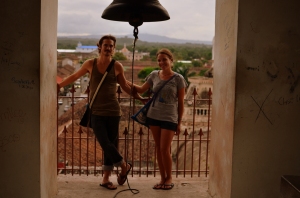 We had to transfer in the hellishly hectic bus depot of Managua during rush hour and wound up waiting in the wrong line for about 25 minutes.  We narrowly missed getting stuffed into a van with 14 others because of people scrambling in front of us, completely cutting in front of the entire waiting line.  We were finding that in Latin American culture it is almost 2nd nature to budge in line.  This annoyance actually turned out to be serendipitous because we discovered that the van would let us off far outside of  town instead of in the center where we needed to be.

Arrival in Granada came at about 9PM.  By then our bodies were tired and our bellies were voicing their discontent.  The hospedaje we picked wound up being down a very dark street without lamps.  We saw shadowy figures lurking in an intersection that initially struck fear in our minds, but turned out to be power line workers trying to fix the temporary outage that had darkened the streets.  After setting our gear down in an unexpectedly pricy and not so comfortable house, we went for a stroll down memory lane.  Elissa was very surprised to see just how much the streets of Granada evolved since her last visit 3 years prior.  Calle La Calzada is the street that stretches from the central plaza all the way to Lake Cocibolca and used to be seedy and sparsely occupied by restaurants.   Upon turning the corner onto the calle, we discovered that the wide brick street was now developed into a bustling night walking scene full of imported tastes and offerings.  There were Irish pubs, ice cream shops, grocery stores,  live acoustic music, artisans vending jewelry, and an endless supply of outdoor tables and seating.   What was once a street that was not recommended for a casual nightly stroll was now where the entire crowd flocked. We grabbed a huge burrito and much needed 2×1 mojitos to take the wearing travel efforts out of our minds.

Granada felt like it was evolving more towards a city like Antigua, Guatemala.  It has lots of beautifully restored colonial architecture in the center of town and preserved churches scattered throughout.  It was also full of touristy puestas with typical souvenirs of various makings in the main plazas.  Our favorite part of the city was definitely the chaotic and enormous mercado in the southern part of town.  Only 4 or 5 blocks from the scenic center, drones of flesh and bones exchanged money for goods on a street that was swollen with bodies.  Large trucks and cars would almost force ably part the sea on the street that didn’t  seem to exist for them.  The mercado building itself looked as if it fell out of the 1800’s and had that antique, vintage appeal.  Transactions were occurring a hundred times a minute around us as we pushed our way into the cavernous buildings to see what treasures they held inside.  These mercados almost feel like little versions of ghetto cities, and tend to have different neighborhoods within.  In the northern section you have the fruit ladies.  In the east part of town is where the meat neighborhood claimed it’s stake.  The west side has wholesale grains, beans, and baskets while the south has veggies, clothes, and housewares.  This mercado had character where ever you looked.  I think we came back every day to really get to know it’s personality.  I even had my hand made Mexican sandals fortified right on the street by a cobbler and his coworkers.  I was promised they would last a thousand years and was ripped off due to a mental roadblock in quick math, but the craftsmanship was remarkable anyway. 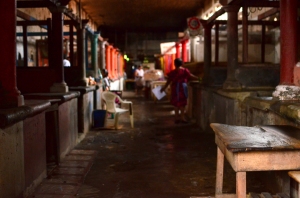 A large part of the original city of Granada was set ablaze due to actions by an American firecracker known as William Walker.  William Walker, who after years of attempting to colonize Central America as part of the United States, eventually defeated the Nicaraguan conservative party coined the “Legitimist Party”.  After holding a fraudulent election he declared himself President of Nicaragua and immediately re-instated slavery, a cunning attempt to attack Southern US investors to help fund his tyranny down south.  Eventually Guatemalan, Salvadoran, and Honduran armies surrounded  his forces, who had been weakened by cholera, were overpowered resulting in a retreat from the city, but not before setting a large part of it on fire.  One of his generals left an inscription declaring, “Aqui fue Granada” (Here was Granada). Interesting history here.

In short, Granada has evolved into a very visitable city for tourists.  It has a sparkling city center yet still possesses a very authentic Nicaraguan experience outside of the UNESCO influence.   Tourists can spend days wandering around the cobble streets, dining on all kinds of international or local cuisine, listening to live music, climbing church towers for panoramic views, and strolling down to the over sized lake.  I think it’s a well developed stop on the gringo trail presently but it is well worth a visit if just for the mercado.

Our timing for leaving couldn’t have been better.  As luck would have it, the minute we found the 2nd class terminal the bus was actually pulling out of the lot en route south.  The ayundante was practically yelling at us to board the over-stuffed Blue Bird while we looked at each other for a good answer to this predictably uncomfortable situation.  We knew what we were in for as we saw people hanging out of the front door of the bus while the ayundante was assuring us that this was the last bus leaving of that day.  Shrugging our shoulders we handing him our bags, while the bus was rolling, and watched in horror as he tossed them on the roof in a frantic manner.  We squeezed our way into the fleshy corral without knowing if our bags were secured before bouncing on down the road.  Ahh, the memories of Central American transportation come flooding back again.

12 thoughts on “Beautiful little Granada, our home for 3 days”