Fresh off their own adventures in Bogota, my longtime college friends (and the most adventuresome travel couple I know) Jason and Brook turned up in Cartagena.  We showed them a little bit of the city before quickly deciding to make tracks off the beaten path.  Our sights were set on showing them a truly unique experience, something that we had been magnetically attracting since our feet set down on the dusty ground in Guadalajara almost 5 months prior.  Cartagena was beautiful, but it was a far cry from the cultural experiences we were looking for, as cities often feel for me.  Outside of its limits we were exposed to a healthy dose of the poorer side of Cartagena through the window of our taxicab en route to the bus station.  I live for these glimpses of how polarized life can be and find them especially captivating in the Latin world.  Our sights were set on Tolu. The bumpy, frequently unpaved roads to get there brought us through the open fields of the lush green Caribbean countryside.   We bounced passed cattle fields, beaten down little towns, and children filling in the potholes that the dirt and gravel roads adopted with every passing vehicle. 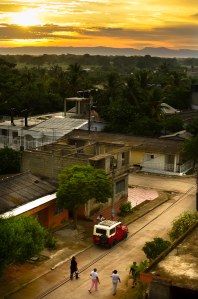 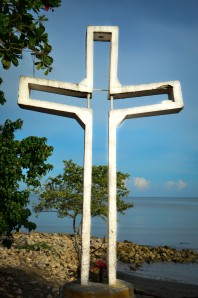 Our bus’s final stop was yet another classic bus station in the middle of nowhere.  Conveniently waiting for us were bike taxis that naturally couldn’t come up with a fare price on the spot.  When we arrived at our hostel we had to argue the price down significantly and still wound up paying too much.  Avoid this trickery by demanding to know the price before, a trick we knew but often forgot to stick too.  After getting settled we took a spin around the beach town looking for something to do.  During the week, Tolu is pretty much dead.  There aren’t really beaches in Tolu, just little patches of sand between man-made jetties.  Warnings from locals, including a police officer, kept us from walking too far away from the town center along the malecon.  Tolu is a Colombian party destination on the weekends and caters to that type of crowd.  Lot’s of delicious cevicherias lined the road facing the water right alongside bars, restaurants, and boutique hotels that were out of our price range.  It appeared that Tolu was a favorite destination for Colombians with money, and was also a stepping-stone for the resort destination of Isla Mucura.  After some hard bargaining, including walking away from the same little booking office several times, we hooked a decent price for a round trip to Isla Mucura at about 50,000 pesos per person (roughly 30 bucks).  Every other office/tout/boat owner was insistent on charging 35,000 one-way if we wanted to spend the night and not return on the same day.

In the morning we schlepped our belongings over to the docks and were sea bound shortly thereafter.  Our boat was packed with a mish-mash of Colombians on vacation.   We, along with one other backpacking couple, were by far the youngest on the boat and by far the least affluent.  The water was the classic turquoise blue you read about in travel magazines and there wasn’t a cloud in the sky.  En route we cruised up to (supposedly) the most densely populated island in the world, Isla Santa Cruz del Islote.   The drive by felt slightly distasteful as all the rich Colombians on board were jumping at the chance to snap pictures at locals.  There was an animals at the zoo kind of feel about it. I have to admit that I took a few snaps myself, but I also take pictures of just about everything I see.  There was a certain air of fascination seeing buildings stacked upon buildings with nothing but walking space in between.  My curiosity about how garbage is dealt with was answered a short while later when we passed a boat surrounded by floating plastic bottles and rubbish.  Plastic waste only has one place to go in this kind of living environment, and unfortunately it’s in the water.

Isla Mucura was a short paddle away from Santa Cruz del Islote and gave a decent amount of it’s inhabitants a source of income.  The beach that is accessible for visitors is lined with restaurants and tables selling crafts by locals.  Upon stepping off the dock we were greeted by Jovenas, a local tout who makes his living giving tours and getting kick backs from restaurants and the accommodations he brings tourists too.  The only options for staying on the island were all inclusive hotels “no trespassing” hotels, a mid range hotel complete with a lagoon water park, and the only hostel on the island where we wound up.  We followed Jovenas with suspicion as he led us through a maze of mangroves, across small streams, and into an alternate reality that traveling beyond the beaten path can often procure.  We broke out of the mangroves and entered into a small, Afro-Carib village with small palm leaf huts, naked babies playing marbles, fishermen pulling their boats in with the day’s catch, and passed the only tienda on the island.  Everyone who we encountered all greeted us with hearty and friendly “Holas”.  Passing little house after little house decorated with imagery of santa claus, flowers, and sunny painted landscapes, we found ourselves in travel bliss once again. Seeing real people in real settings always has this affect on me.

After we exited the village and left our curious little tag-alongs, we walked through lush green grass spoiled only by healthy, leafy palm trees.  Huge piles of conch shells next to fishing boats silently spelled out a local staple source for the little community.  Jovenas brought us to the hostal we sought after, but not before setting us up with a snorkel tour the following day.  Sleeping options were rooms in the main building, hammocks, or the stilted hut on that sat on it’s own concrete slab, jutting out into the ocean and just happened to be available that night.  I’ll give you a guess what we chose.  Although the beds were beaten down and salty, geckos and mosquitos were everywhere, and the air was supremely hot and sticky during the day, it quickly became our favorite new home.  Waves were swishing and splashing on 3 sides of the hut and we felt like we were on an abandoned island completely surrounded by surf.  I could fall asleep to that sound every night for the rest of my life.

The beach was visually the kind of beach that most would dream about.  Shallow, warm teal waters and bright white sand everywhere.  Seafood was abundant and way overpriced.  We all decided to split a whole fish as a snack and were presented with what could have been nothing other than a parrot fish.  This saddened Jason and I especially, because we had studied reef ecosystems in school and knew the importance of parrot fish to the general health of the environment.  That aside, it was probably the best tasting whole fish I had ever consumed (it was already dead at that point, right?).  Baby lobsters were presented to us and were followed by our polite refusals.  It appeared that forethought was lacking in responsible fishing.  Responsible tourism was also to blame. 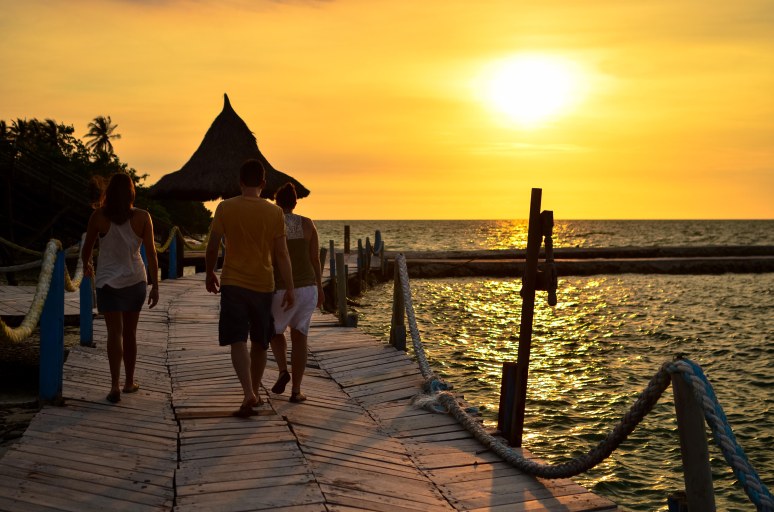 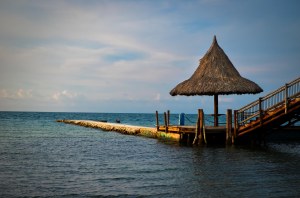 The next morning our snorkel tour confirmed the health of the reefs, or what was left of them (later we heard that dynamite fishing techniques were still being used).  We were joined by the couple that we cruised into the island on and with a Dutch gent named Roger.  Roger was traveling solo and was finishing up his South American adventures in spanning from the Antarctic to Venezuela and provided us with great tips and conversation.   Jovenas brought us to a few spots on his little boat equipped with snorkels that appeared as if they were found on previous snorkel adventures.  There were some pretty cool looking fish out and about but there was also empty bottles and lots of coral bleaching.

After the tour we decided to check out the other beach near one of the hotels and walked around the deserted low season wooden adventure-like park that surrounded it.  We didn’t see a single person on staff and got to mess around on the stairs and towers while the sun was turning yellow.  A beautiful sunset was taken in and plenty of rum was later consumed.  It turns out that geckos liked rum and cokes as much as we did and would jump on the chance to get in on one of our little plastic cups whenever they could. 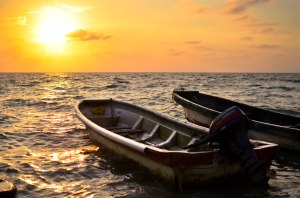 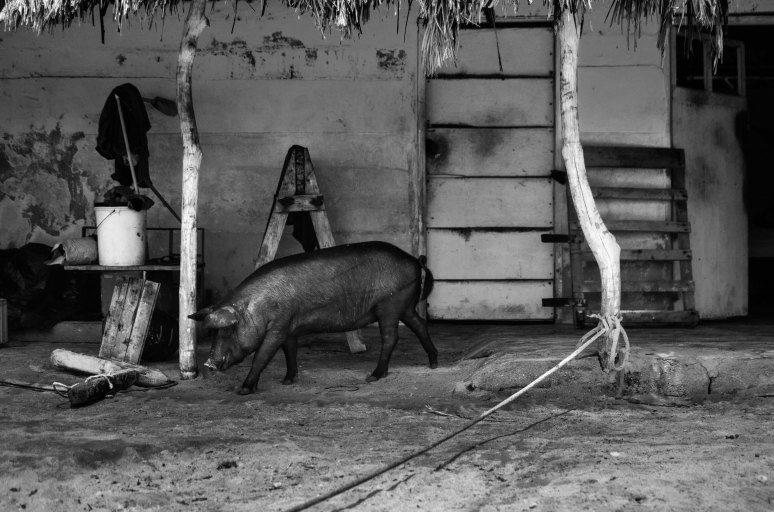 The island life was filled with copious amounts of relaxation, especially during the hot mid-day sun.  It was a common sight to see plenty of hammock-induced comas, and shirts were always optional.  The family pig, goats, sheep, and chickens were constantly prodding the ground for sustenance and milling about with the soothing sounds of waves slapping against the sand.  I found one of the youngest daughters sleeping peacefully on a mattress and was incredibly moved by the sight (It wound up being one of my favorite images).  Wanting to give these isolated kids something to enjoy, Elissa and Brook spent an afternoon creating simple collages using magazine clippings and glue sticks.   We dolled them out to some little tykes on a stroll through the little village much to their delight. 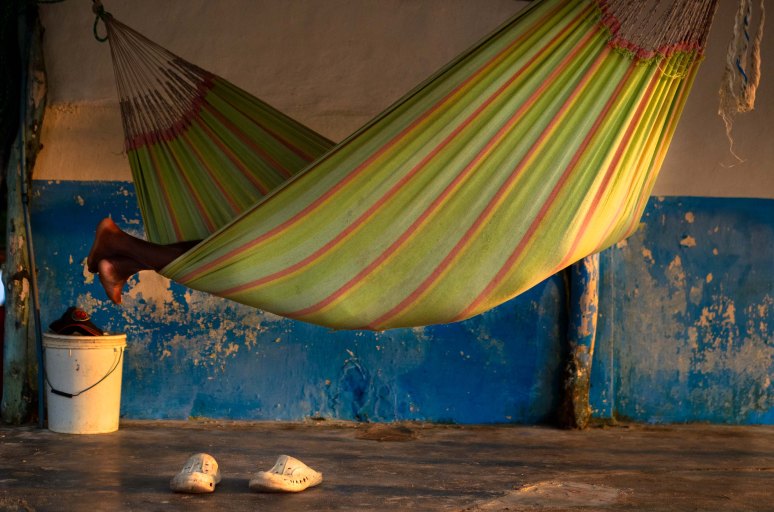 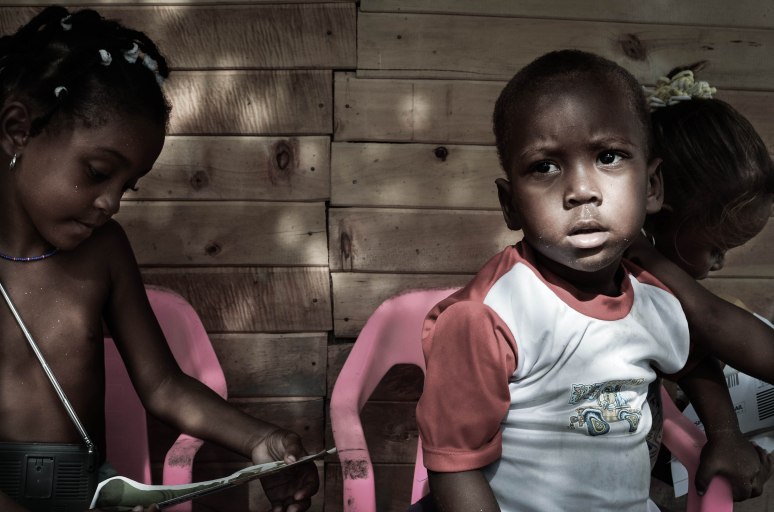 The time came for us to leave the island of Mucura.  The day we left was stormy.  Waves were crashing into the dock as offshore winds were gathering steam.  The ride was epically disastrous on many fronts.  Waves began landing into our laps as rain began to add it’s frustrations upon us.  Visibility disappeared and the captain lost sight of land and sense of direction.  We stopped several times to try and orient ourselves, allowing the larger waves to fully saturate our bodies.  Eventually land was found, and we were way off course.  As the boat pulled up to Tolu we were dropped off in a shallow inlet and waded back to the shore.  Memories once again made, incredible imagery seared into our minds.

Thanks for reading and please share with anyone who likes travel!