I must admit that it’s been 3 months since my last post about our Latin American adventure,  which was one of the main reasons I created this blog.  It’s been a very busy time in my life.  Writing is a part of who I am and I’ve been putting it on the back burner too long, so for that I apologize to myself.  I also want to apologize to those that follow this journey, who have been traveling back in time through our footsteps with my words and images.  Time is precious. In fact, I think it is one of the most precious things we have and I am going to set aside a little more of it to write.

So back to Colombia we go.

San Gil:
We arrived back to the hub of Santa Marta to get clean and recuperate from the desert.  The hot and steamy air quickly led us to make the decision to finally get away from the Caribbean coast that we’d been exploring for just over a month.  We chose to skip over the urban scene at Bucamaranga and go directly to San Gil, which was a much smaller city built within the mountains of Colombia’s Cordillera Central.  It touted itself as an adventure town and had a wide variety of extreme activities and a healthy presence of agencies to support them.  We passed by several on the way from the bus station to our hostel ( Macondo) located at the top of a hill near the center of town.  It was here we based up for our exploration in the area. It felt so relieving to be back to moderate temperatures and fresh, dryer air. We instantly gravitated towards the mercado, which rumor had it was amazing for produce lovers.  A quick stroll through the square and it’s massively stout palm trees brought us into our version of paradise.  Bananas, mangoes, papayas, kiwis, strawberries, apples, peaches, and oranges lived there.  Delicious arepas (sweet corn patties with a melted cheese center) made us stop in our tracks every time. There was a wide variety of delicious barbecue finger foods that we hadn’t encountered before, including full sized pigs stuffed with pork fried rice inside. It was a bustling scene. There were expired pick-up trucks weighed down by thousands of pounds of green plantains, Colombian farmers in their 60’s carrying 50lb bails of fresh tobacco leaves over their shoulders, and deals going on everywhere you looked and listened.  It felt good to be out of the incessant heat and graced by bounty that this climate brought with it.  Fresh fruits and vegetables were back in our daily routine, and we were excited to try out new dishes, smoothies, and pants again. 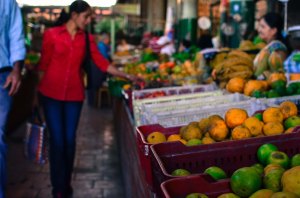 Partly due to my inability to sit still, but mainly due to our collective curiosity, we didn’t rest long before planning a day trip and hike around the beautiful town of Barichara.  We grabbed a mini bus in the station behind the last building of the mercado and ventured up into the hills, past rolling seas of hay fields with enormous playful clouds as a backdrop. Our eyes drank in the windy roads of pure Colombian country highlands.  It’s still surprisingly easy to close my eyes and still hear the wind blowing through the bus window while the landscape softly shifted from hills to trees and sweeping valley views.  Barichara eventually popped up out of the hills, perched atop a little nook on a ridge.  Perfectly sculpted colonial houses of  whitewashed walls and red clay tile roofs rose from the green land.  Beautifully hand placed cobble stone streets lay at their feet, completing the scene of an almost painted perfection.  Barichara’s name is a slight variation of Barachala, which is a Guane Indian word meaning a good place to rest.  It was also believed to be an area that had a strong proclivity towards longevity.  There was a definite presence of strong, gritty, and sweet elderly Colombians in this town.  While passing open doorway a short, jolly woman just about took us into her house, bellowing every word with the biggest smile on her face. 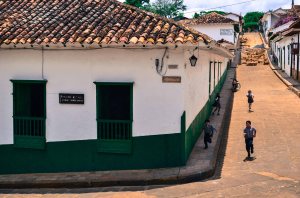 We killed the better part of the day meandering around the beautifully isolated outskirts of the village, looking at fairy tail trees with Spanish moss blowing in the wind and sneaking glances into all the half open doorways of the sleepy town.  There was a museum in the middle of town that had a sizable collection of relics of the town’s past, including printing presses, old machines, and a beautiful collection of the ammonite fossils that the area was known for.  Artisan stores had everything from welded metal sculptures, hand made shoes, clay painted wind chimes, and huge fossils of the prehistoric snails.  Besides the quiet, beautiful pace of life this pretty village fostered, it held a massively ornate church that drew tourists from all over creation.  Amateur photographers were laying on the steps searching for unique angles, snapping away in front of the facade while school children ran past without even the slightest notion of curiosity.  This was their home, and they were probably used to this kind of scene.  Small, hilly streets kept a vast array of unique houses with beautifully worn windows and doors everywhere we looked.  It was almost over charming. 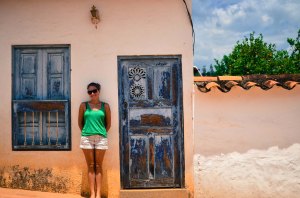 We hiked about 2 hours outside of Barichara to a small town called Guane.  A path built by a German engineer years back connected the two villages by stones pounded into the earth virtually the entire way.  We strolled past ancient rock walls covered in years of mossy growth underneath trees dripping in Spanish moss of their own.  It was a fairy tale setting, and there was not a soul in sight.  A farmer tending his cattle was the only person we encountered during the trek prior to arriving at the eerily sleepy town.  This sister village of Barichara had a small town center, a very slow pace of life, and a definite older generation wandering the streets in their hometown.  Huge, basketball sized fossils rested in front of the town church and were found in the hills nearby.  Local excitement consisted of pick up games of soccer and basketball, and watching a parade of goats walk through the streets followed by the farmer that tended them.  We sat and relaxed after a long day of walking and waited for the last shuttle bus back to San Gil for the night.  Stars appeared above our heads while our bus winded back down to the mercado in San Gil’s town center. 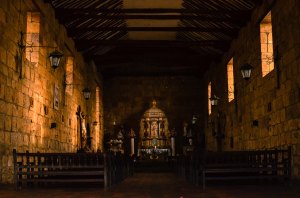 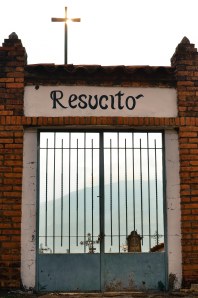 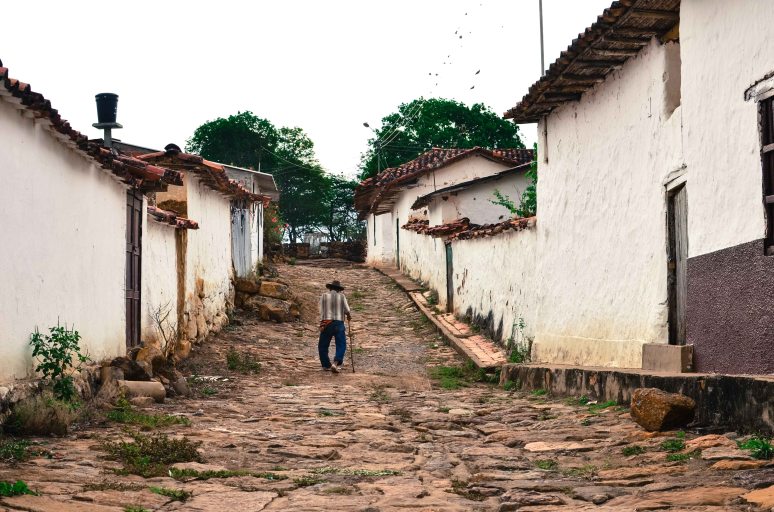 It was in San Gil that we decided Paragliding was an endeavor worth pursuing.  Without much hesitation, we signed up for the experience through our hostel (something we normally don’t do) and were picked up by a shuttle in the early afternoon.  We stopped at an agency to pay up and picked up our guides, which looked about 10 years younger than we were hoping for.  Elissa kept telling me that if these kids were the ones taking us 300 feet in the air she was bailing out.  Tours in Latin America are often set up the same, with so called “expert guides” often being just some guy who knows where a cave is and has very little if any safety training if something were to go awry.  Travelers often put themselves into situations where gut instincts would normally kick in and question the circumstances, yet since others are doing it and you are paying a guide everything will work out OK.  This was a conversation we had with many tourists, who visited places like the amazon and went fishing for piranhas, swam with river dolphins in murky waters, or went trekking through jungles without so much as a knife for protection.  But I digress.  When we arrived at the hill, we were relieved to learn that the oldest guide was about our age, and was one of the 2 who would actually be taking flight with patrons. There was enough wind when we arrived, so we waited with anticipation while the breeze picked up.  After an anxious period of waiting, they finally took off with the first set of gringos and went sailing into the sky. 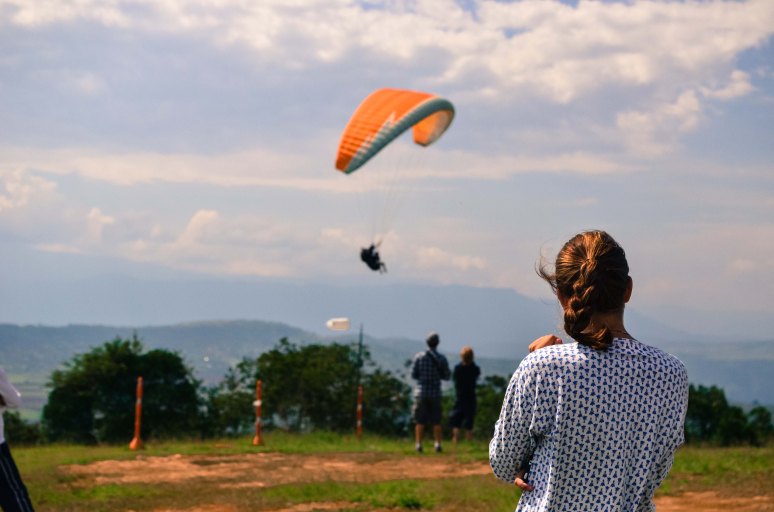 One of the first take off’s went dangerously close to a tree perched downhill,  mainly for thrills by the guide.  Trying to duplicate this, the next take off crashed directly into the thick branches, much to the dismay of the patron and his girlfriend who was filming the entire thing.  The harnessed wad of humans were momentarily encapsulated in green leaves and branches while the sail started falling towards the ground.  After a brief pause the wind eventually grabbed the concave arch of the chute and pulled them abruptly out of the mess and into the air.  This obviously made everyone a little uneasy, but it was too funny to take seriously. 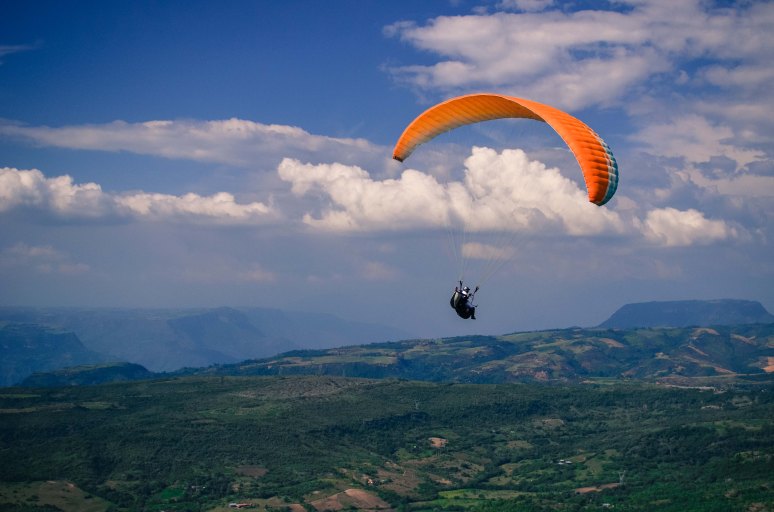 Take off was sudden and unexpected, with no instructions whatsoever.  Just put on a helmet, stand up, and run for a second then hold on for dear life.  Latin America.  Having lots of experience giving tourists a ride, I asked my instructor to try and make me puke.  He took full advantage of this with fly by’s and swooping arcs that reminded me of physics class and what centripetal acceleration was all about.  The view was stunning, and the initial feeling of flying around was very surreal.  A canyon in the distance cut through the land with hills, trees, and tobacco farms as far as our eyes could focus.  Huge, fluffy clouds sat steadfast in the sky with different shades of green brush-stroked onto the bold canvas of mountain valleys and ridges.  My guide took us out and away from the ridge and we were at least 300-500 feet in the air floating above tiny farm houses with nothing but silence and silly jokes about the view from his office.  Honestly, after about 5 minutes into the experience it was kind of boring being a passenger just sitting and looking around.  I would have much rather preferred being in control of the situation, and could see the fun in that.  We both had similar sentiments, and by the time we landed we were glad we did it but honestly would probably not do it again tandem. 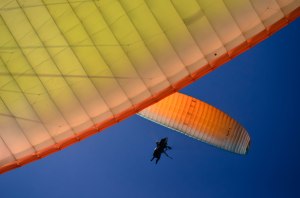 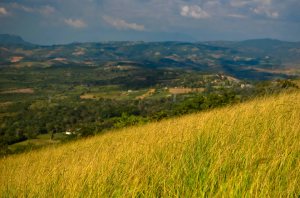 With advice from Macondo’s owner, we determined that we could not pass up the idea of El Cocuy.  We were only a few hours from Tunja, the city where we would have to transfer buses to the epically isolated and breathtakingly beautiful mountain town.  We had a sleepless, 10 hour bus ride through the windiest mountain roads to get there, but it was another experience that we just couldn’t pass up. 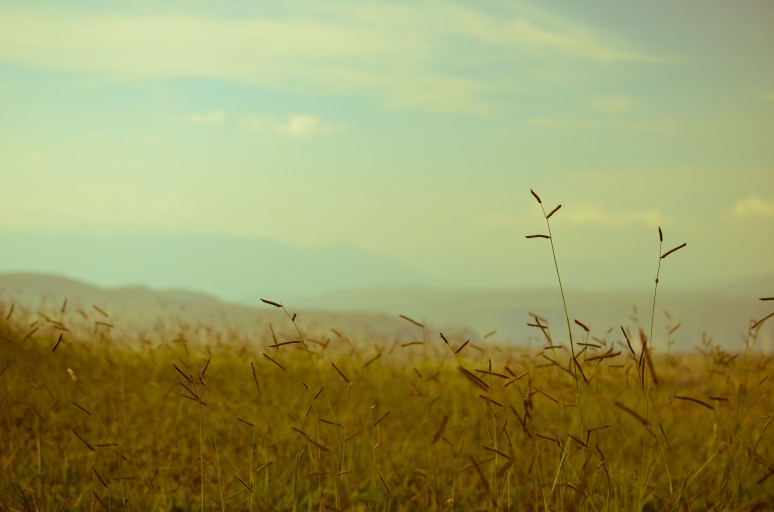