High off of our mountainous excursion into El Cocuy, we were off once again descending dusty windy mountain roads back towards city life.  Our bus was full of Colombians and a few other travelers all deep in thought.  A slideshow of small towns, road cuts, and jagged peaks played on repeat through the weathered windows of our vehicles four thousandth trip through the pass.  We both knew we had just experienced one of the highlights of our entire trip, and were savoring the thoughts about every memory captured.  Hearing about it is one thing, which we had from numerous travelers on the road, but seeing it in person is definitely the only way to truly grasp life up there, and we had kept our eyes as open as possible.  Every labored, oxygen deprived breath that came with every heavy step made the trip that much more memorable.  Life seems to be hinting that the most detailed memories are intrinsically intertwined with physical trials and tribulations, as I’m finding more and more that the memories that stand out the most almost always have some sort of physical hardship associated with them.  Anyway, the bus we were on wasn’t direct back to the hub of Tunja for some reason, so we were dropped off in a tiny town that existed but didn’t really offer much for outsiders to satiate their thirst for exploration and staying put.  The town was established but very empty in the middle of that sunny afternoon.  After some heavy negotiations with the next departure we were dropped back off in Tunja with a million options to get to Villa De Leyva, which was going to be our resting grounds after physically punishing our bodies at high altitudes. 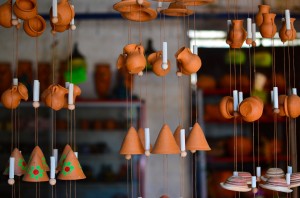 After arriving we set forth with our rudimentary directions to a shop that would have some information on the hostel we were seeking in the village.  We tried to find other housing, but everything was very pricey in town and we ultimately decided to go with lonely planet’s #1 recommendation (usually not our preferred method) Hostal Rana.  This hostel was the homestead of a Colombian Biologist who became popular with his guided trips in the area that showcased the natural beauty while giving a brief education of the biodiversity and it’s role in the environment.  After we failing to locate his shop, we popped into a produce store where the owner coincidentally knew the wife of the biologist and within minutes we were getting a free taxi ride up to the hostel.  Ahh, Colombia.  After getting situated in our new digs, which was a beautiful colonial compound with birds, flowers, and life everywhere, we kicked our feet up and relaxed away the sore muscles from our trip.  Travelers in the hostel were telling us about the various hikes and waterfall trails that could be explored from this vantage point, but due to extremely dry weather lately the waterfalls were pretty dried up and the scenery wasn’t grabbing our curious minds.

There was a lot of details found within the bones of this town, which was coined as one of Colombia’s prettiest.  Villa de Leyva has retained it’s charm throughout the years of trouble and turmoil that weathered the country.  Weekenders from Bogota were the town’s main draw, but international tourism has been steadily growing throughout the years too.   It’s wide, cobblestone streets are the arteries between the charmingly perfect white washed, red tiled colonial buildings that are meticulously preserved in detail.  It was first established in 1572 and still presently looks like it could be from that era if the right people are walking by.  The roads are uneven and completely made from cobblestones, so modern modes of transportation have been kept to a minimum in the older parts of town.  Most people are seen strolling the streets on foot, and during the day the crowd is somewhat tame under the bright, powerful rays of mountain sunlight that breaks through the fluffy clouds. 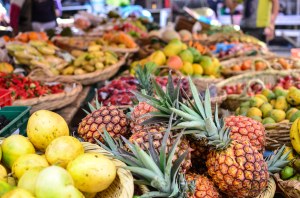 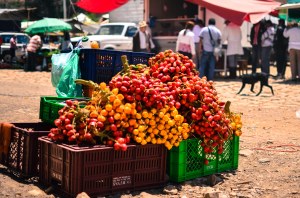 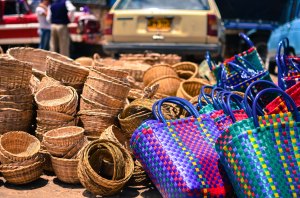 For our duration in this valley we chose to digest the town and visit the famed weekend farmer’s market.  Life here for the general population seemed beautifully simple, but also heavily involved with the weekend volume of Colombian tourists from Bogota.  Prices for boutique hotels reflected the Bogota influence, and there were international dining options for all types of sophisticated palates.  We were quite fond of the Colombian set lunch meals and didn’t venture into the ex-pat establishments at all, even with the wide variety of eateries and their tempting menus.  Small shops showcased artisans’ impeccable skills in leather, metal works, cowboy hats, food, and pottery.  Prices again reflected the Bogota influence.  You could virtually walk around all day long, popping into small painted wooden doorways and enter into somebody’s lifetime of honing their skillful art which was showcased in their work.  Beautiful little plazas could be found walking around the dusty streets, complete with old Colombian men drinking beer and watching the day pass along under the shade of their leather hats.  The town had a definite beauty and vibe that asked you to slow down and enjoy the surroundings.  The mountains seem to have that kind of control over our souls, and this is a trend I’ve noticed around the world. 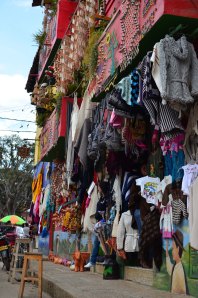 Instead of renting bikes and chasing roadside dinosaur fossils, local vineyards, and swimming holes we chose to check out a small artisan town called Raquira.  Rumor had it that on the weekends the town comes to life with virtually every building offering some kind of shop with their take on art.  A quick collectivo ride from the terminal in Villa de Leyva brought us through the bustling streets of the tiny town.  What we saw when we got into town was humorously shocking.  Nearly every single shop was covered to the gills in hammocks, brightly colored fabrics, painted pottery, sculptures, and anything else you could imagine a tourist would buy.  Some building’ facades were completely covered with goods from the sidewalk to the roof 3 stories up.  We immediately walked outside of the town center to see what life was like away from the plazas, and quickly found a great farmers market under an outdoor gymnasium.  Our fondness for mercados seems to beckon our innermost curiousity and we always end up stumbling upon them no matter where we go or what we are looking for.  It’s almost a magnetic attraction for us, and it lets us peer into gears of local life while letting us feast on fruit that we’ll never forget.  It was in this market where we met a friendly farmer who stood out from the rest of the crowd without making a sound.  He must have been at least 95 years old, standing in front of us wearing a woven poncho and homemade cane.  I told him in Spanish that I was making a project about hands of the world and would love to snap a picture of his because they told a story of a lifetime of hard work.  He smiled and propped his hands with his cane and let me go at it, which was a moment I won’t ever forget. 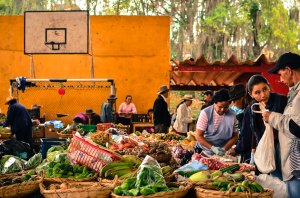 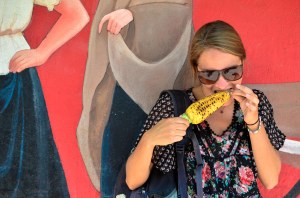 The village became slightly bizarre as we walked around it’s circus-like atmosphere for a while.  Right in front of the church in the main plaza there was a statue of a kid urinating on top of the water fountain, which felt odd. Every business was catered towards tourist dollars and it seemed that was the only source of income here, aside from farming.   We found a small shop in the beginning of the village and spoke to the owner about her thoughts of her hometown.  She remembered a few years ago it used to be a quiet, beautiful little Colombian town before the drones of tourists changed the economy.  It has been both a blessing and curse in her eyes, as it’s changed everything, including family life.  Elissa bought one of these beautiful bags that she made, and we thanked her for her stories and her time before heading back to Villa de Leyva to plan the next stop on our trip.  After all, planning more than a day ahead of time was not one of our strong points and it seemed to be working out swimmingly 7 months into our trip.  After a few back and forth options we decided that we were going to visit Bogota after all, which was an option we had been trying to avoid after hearing dozens of opinions from fellow travelers throughout Colombia.  We set off blindly for the metropolis the following day, bidding farewell to Villa de Leyva.