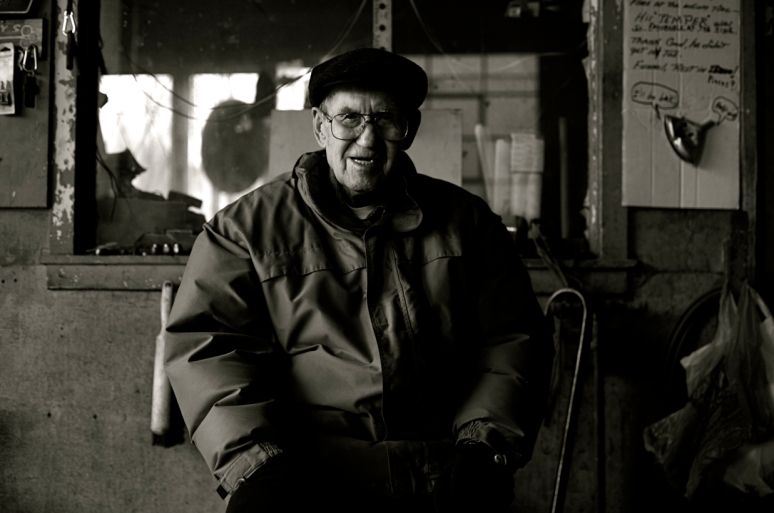 A few days ago my Grampa passed away, leaving behind a life worth remembering and lot of souls that won’t forget where they came from.  I want to get out these thoughts as both a tribute to his memory and to thank him for all that he did in his time spent in this world.  He was 92 years young when he took his last breath, but his legacy lives on in each of the several dozen beating hearts he is directly responsible for.  Death is a hard concept to wrap our minds around, and I’ve never really wrote much on this subject.  I’m not sure if my true intentions are going to come out in written word, but I feel it’s something that I need to touch upon for myself. 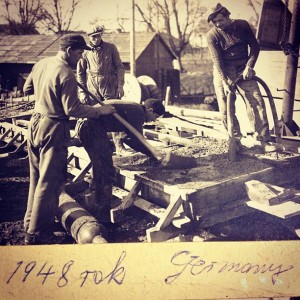 Farthest back on the left: working as a laborer in Germany

My Grampa was born in a small town in Poland in June of 1921 and had 2 sisters as siblings.  He signed up for the Polish National Guard when he was 17 years old, and quickly went to active duty when Germany invaded Poland a short time later.  At the age of 18 he was fighting in France when his company was captured, and sent to a POW camp.  He’s seen and been through things that I’m sure words and stories could never do justice, but he never spoke a word about them to us kids. I’ve heard some stories from him about he and his comrades making homemade alcohol during the war, but not much more than that.  Shortly after being freed from the American forces he wound up working as a laborer in a German laborer union, the very country that almost took his life and surely took those of friends around him.  He met my grandmother, another Polish prisoner herself, and were married a short while later.  A year after my father was born in 1951, my grandparents traveled on a ship to Ellis Island.  They wound up settling into the Amsterdam area of upstate NY like many other polish immigrants of the time.  Upstate NY became a beacon of light for Polish families somehow, and there were many neighborhoods that became heavily inundated with kielbasas and pierogies during that era.

He was a living time capsule of a generation that is quickly fading with each passing day here in the United States.  1st generation immigrants that were naturalized in the US often lived a simple, hard working life style that was typically free from luxuries that actually having spending money would garnish.  My grandparents raised 7 children on a very tight budget, and my grandfather labored for most of his working life in a paving and concrete company.  In fact, I believe he finally stopped this line of work when he was in his early 70’s.  He was tough as nails, and had a willpower (and stubbornness) to match.  He would mow the long, terraced lawn on the steep hill behind his house, a task that would get me huffing and puffing, well into his 70’s too.  My dad has filled my head with stories of 7 children sitting around the dinner table eating polish meals, stretching 1 can of tuna fish for 7 sandwiches, walking through blizzard like conditions to get to school, and sharing a house that would entertain about 50 people during Christmas and summertime family gatherings.  This was life for immigrants in upstate NY.

English was his 2nd language and conversations with him were typically brief and to the point.  After I introduced him to my Polish girlfriend for the first time, he shook her hand and then asked her when we were getting married.  One thing I know for certain was that family was important to him.  His eyes would light up and he would always have the same, genuine smile when we would pay him a visit.  Visiting Grampa was something that my dad instilled in my head every time I was around, and I understand the importance more than ever before of setting aside time to do so.  It usually took him a second to figure out who I was but his hand would quickly extend for a handshake, followed by the traditional offering of food, candy, or snacks in the kitchen.  When he had to be brought to daycare during the week, he would try to buy the front seat by bribing the access van driver with a bag of cookies.  This trait would stick with him until the very end, when even in his last days at the nursing home he would be found offering candy sweets to us  and other residents in the home.  This would sometimes get him in trouble with diabetic residents, but it was a part of him that remained intact despite his memory loss and dementia.

In his last days we found out he had colon cancer, but that didn’t stop him from trying to hold onto his faculties.  He would be bed ridden for a few days straight and would shake out of it temporarily.  He would find the strength and energy to get dressed, get back in his wheel chair, and go zipping around the nursing home like he was doing his job.  This was just like a light bulb that is about to burn out, with a last surge of energy putting life into the filament before it fades to black forever.  The last time he did that was a few days before he passed.  Pneumonia got the best of him, and he was too weak to go on.

3 generations and the Sunday diner routine

His 7 children produced almost 2 dozen grandchildren and many great grandchildren on top of that.  The family house could tell a million stories if the walls and shag carpet could talk, and will forever hold memories in it’s now quiet and empty spaces.  One of my favorite recent memories of Grampa was when he helped us clean out a space in my father’s garage to put my truck away for storage.  At 90, his instinctual need to help and work kicked in while we were moving things around. He stood up without his cane, grabbed a broom with a dustpan, and started sweeping the floor when no one was looking.  I quickly grabbed my camera and snapped a few images that I’ll cherish forever.

Every man’s road comes to an end, and my Grampa paved a long road at that.  Without knowing it, he taught me how to be proud of my Polish background. It’s something that came with a lot of bad jokes and teasing when I was growing up, but it’s something I hold near and dear to myself.  I’ve noticed that I often find myself telling lots of stories about my Polish grandparents, and the undeniably honest life they led with a sense of pride and honor.  I’ve got my family to thank for that, a family that my Grampa and Gramma created. 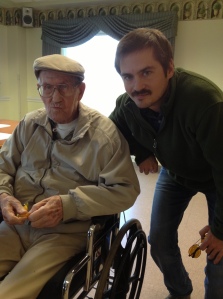 Below is the last picture I captured of my Grampa alive, 2 days after Christmas this past year.  He was sleeping when we first walked in, and opened one eye when we said hello before going back to sleep.  When the food came in for dinner we was woken up by the staff and propped up to eat what they had brought.  He was himself again all of the sudden, stating that the food given to him should be brought home and fed to a dog.  The ice cream disappeared without contest.  I will forever remember and miss him, and thank him for the life that he led. 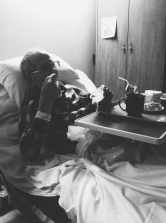 16 thoughts on “Remembering our Roots”