Yucatan, the other Mexico: Campeche and Vallodolid 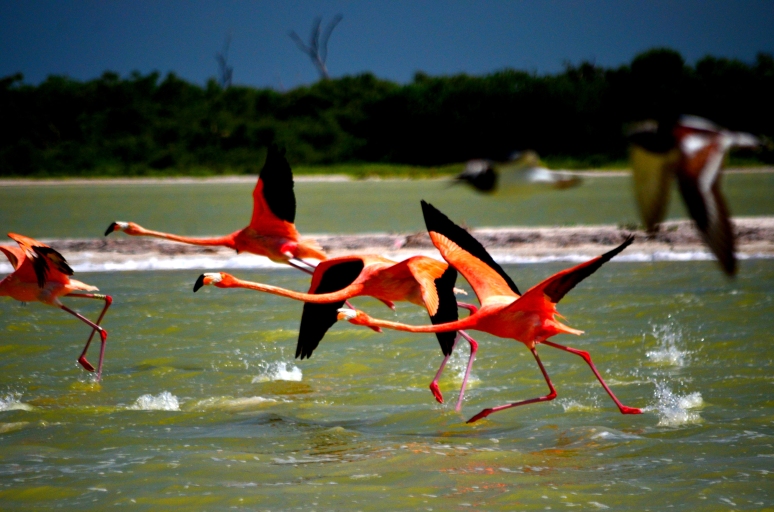 The barely bearable humidity of the sticky jungle air eased the decision to get to water as quickly as possible.  Our first stop was intended for Merida but we were suspicious that this would be another stop along the tourist trail where the hostel scene would gift us with blatant party tourism and the exact opposite of appealing (unappealing).  Upon arriving into another hot Mexican bus station we found out that there was a departure heading for Campeche in 5 minutes.  Naturally we took it as a sign and off we went.  Campeche seemed like a reasonable destination to let our eyes adjust to the Caribbean Sea and our body temperatures adjust back to more livable conditions.  Besides it’s proximity to water, the town was proudly boasting UNESCO world heritage  status with a very well preserved downtown historic center.  Now add to that list a fortified wall surrounding the city to protect it from constantly reoccurring pirate attacks in the late 1500’s and you’ve got my attention.  From these details alone we chose to press forward towards the coast and without having completed any sort of research prior to our departure (no internets in the jungle) we blindly rolled into town.  Immediately we noticed that it was just as humid as the jungle and would make the mercury in a glass thermometer dance a little more.  The three hostels we went to were awful so we opted with a cheap hotel for a similar price.  By now we had been walking around for about 25 minutes with all of our gear and were inundated in sweat.  A quick spin around town confirmed that Campeche was a waste of time.  It was a city that historically had a very interesting past but presently was a mix of preserved buildings with modern day amenities complimented with an over developed ocean front.  Giant glass buildings, hotels, and fast food joints were planted firmly just outside the fortified bastions.  Were we in Texas? We tried to see the beauty in this place but just couldn’t find it.  The Mercado had the slightest whiff of authenticity but that quickly faded when we noticed that venders were watching movies on iPads and mangoes were 5 times the cost of what they normally would be.  In the morning we fled Campeche and coasted into Vallodolid. 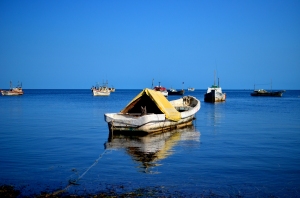 Vallodolid was our saving grace in the Yucatan.  This awesome little place was once a Mayan city that was eventually was conquered by the Spanish, as most cities in Mexico,  and thus turning into a colonial masterpiece that keeps a real small town vibe.  The Mayans didn’t give up easily here having several revolts and even a successful sacking, reclaiming the city back for a short spell. Vallodolid lies in a part of Mexico where there are many freshwater cenotes to assist your contention with the hot and humid Yucatan air.  Centotes are basically gigantic underground caves formed by dissolution of limestone bedrock by underground rivers and groundwater systems.  Some cenotes are well over 200 feet deep from the top edge of the void to the surface of the water and can range from a fully unclosed cavern to a wide open hole in the ground.  The roof of the caves in many of Mexico’s cenotes have completely collapsed giving the feeling that someone used a gigantic percussive action drill equipped with a diamond coated bit into the ground .   We rented bicycles one hot afternoon and hunted down the locals’ favorite (and cheapest) cenote on the outskirts of town and lost a few hours swimming and rope-swinging into the blue-raspberry colored water.  Schools of little fish swam around us while  families were relishing a lazy Sunday at the swimming hole.  Tree roots grew down from the lip of the hole some 125 feet to plant their wooden straws into the cool water for sustenance.  On this day there happened to be some rock climbers descending into the water along the massive tree veins.

Vallodolid is a great backpacker’s hub for many of Mexico’s main attractions in the Yucatan, both along the coast and inland.  It was in very close proximity to Rio Lagartos, a small fishing town situated in a preserved national lagoon that is home to one of the worlds largest flamingo population.  We felt that we were destined to see these birds so we were disgusted when we saw the absurdly inflated prices of the tours offered through our hostel and other agencies in town.  After a little internet research we decided to try and figure it out for ourselves using public transportation and hopefully a bit of luck.  At this point I’d like to mention that as a traveler without a car you are bound to the Mexican bus schedule system, which rarely considers convenience for travelers outside of normal tourism behavior.  We took a bus to our next little hub town and immediately found out the next ride to Rio Largartes would not depart for another 3 hours.  This would have killed the entire day and probably our relationship.  After asking a few questions to the right people we found ourselves in a sweaty collectivo van behind a grocery store  full of locals.  This is our preferred way of travel and truly is the most interesting and real way to get around.  With only the name of a local fisherman we grabbed off the internet and rudimentary instructions on where he may or may not be located we set off to find Adriano. 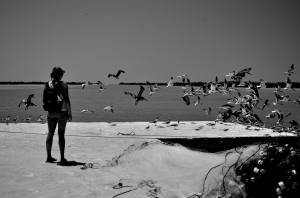 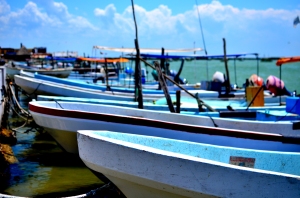 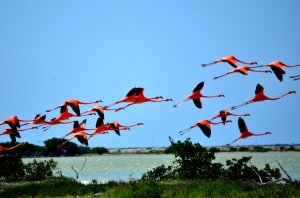 Adriano supposedly gives tours for about half the cost of what the tours were going to grab from our wallets.  As luck would have it Adriano was pulling up to dock his boat as we were walking by his house.  A short time later we  found ourselves on his boat with some fresh beers flying through the untamed lagoon.  Adriano knew this lagoon like the back of his hand and I watched with wide eyes as he maneuvered his skiff through a small maze of channels.  For him it was probably like running to the grocery store to grab some milk, take a right past the 2nd mangrove tunnel, bear left at the fork with the gigantic dead tree…  We killed the engine upon entering a large shallow channel about the size of a small lake and let our eyes focus on the majestic pink birds.  Adriano grabbed a stick and punted us towards the pink flamingos in order to keep them from getting frightened.  After slowly drifting up to about 20 feet from the 100 or so birds they started to take off.  Since this was an afternoon excursion most of the thousands of flamingos were elsewhere in the mangroves but I think was a better experience because we were the only boat out there. Our guide told us that  it is all too common to be amongst 20 or 30 other vessels in the morning or late afternoon.  Adriano then took us to some breeding grounds to see larger flocks and guided us around the large open shallow waters where the birds were feeding.  After letting us wander around on an island he took us to give us our traditional Mayan mud bath.  Here he scooped out fresh mud from the ground and smothered us in the thick, white, heavy muck head-to-toe in a mask that we sported on the ride back into town.  The overall experience was amazing and I’m still finding remnants of the mud on my bag and camera gear to this date. 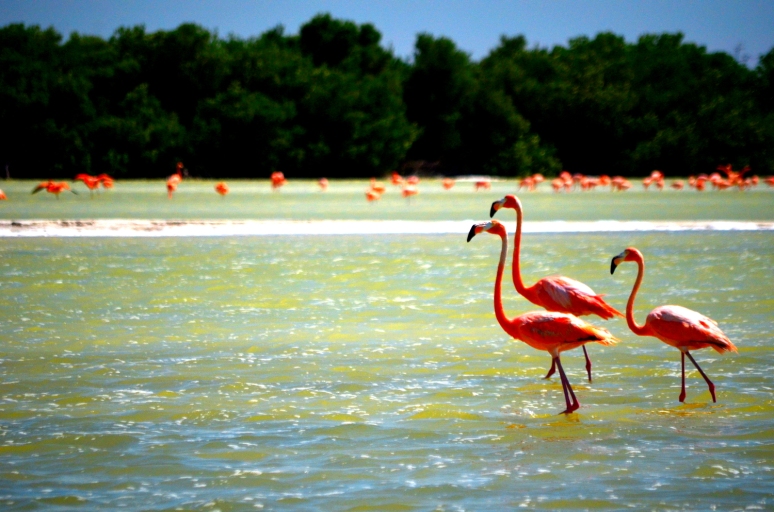 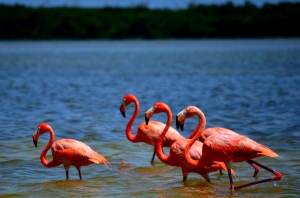 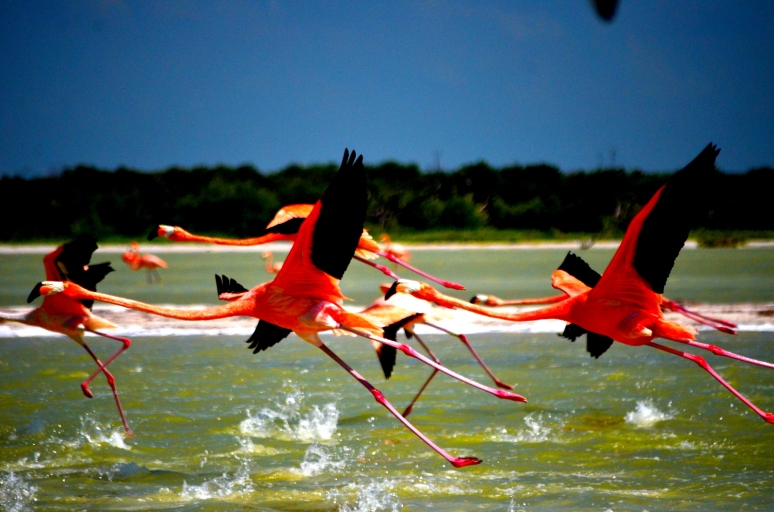 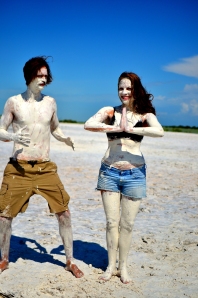 One of the main reasons we came to Vallodolid was to visit the world renown ruins of Chichen Itza.  We were severely disappointed to find out that the ruins themselves cost about 3 times the price of all the other ruins we’ve been to at this point and is a very streamlined tourist destination from the blight of Mexico known as Cancun.  Something like 1 million people visit the ruins each year and  this ultimately results in a Disneyland-like feel to something that is supposed to be reflective, meditative, and spiritual.  Seeing as how this was not really in our budget we opted to get there around 4PM when supposedly the gates were open to anybody until 5PM when the park closes.  This would give us an hour to see the sight free of charge and better fit our budgetary needs.  Being victim once again to the bus system in Mexico we had to take another impressively hot van to the site which was approximately one hour away.  Within minutes I was in a conscious state of oblivion, pouring sweat from every pore of my body while miles slowly melted past.  We arrived slightly later than 4PM and only had about 20 minutes in the site before areas began to get roped off to prepare the park for closing.  We were able to see some of the main attractions but missed the sacrificial cenote and the planetarium.  But since we didn’t pay to get in it was an easy pill to swallow.  And from the looks of the site it seemed to be doing quite well with the constant Cancun tourist pipeline bringing in paper gold.  Chichen Itza was also tarnished with hundreds of vendors hawking absolute garbage bastardizing the Mayan culture and significance of the ancient city itself.  While waiting for the bus I humored a vendor with a “hand carved” mayan calendar and watched the price drop from 500 pesos down to 100 based on my complete disinterest in the molded plastic souvenir.

On the way out of town we passed by a small leather goods shop that was on our daily route to and from the hostel.  It had had handmade boots on the sidewalk to entice pedestrians and walls full of sandals.  We stopped in and spoke with the small shop owner who was making boots with an old, foot peddled sewing machine during our entire conversation.  He wasn’t even looking anywhere near his work while he was perfectly stitching leather into rubber soles.  I bought a pair of sandals from him for 12 bucks that fit like a glove and are probably the most comfortable pair of sandals I’ve ever owned.  Riding off this high we met a nervous plastic surgeon from Miami  in the bus station while waiting for our chariot out of town.  After a few minutes of chit chat he told us he worked for Doctors Without Borders and had been robbed of everything, including his passport, the previous night.  He was stuck in a situation and if he could make it to Mexico City they would set him up in a hotel while his new passport was processed.  Having only 5 minutes to decide on how we could help him out we handed over 1,000 pesos and kindly asked that he pay us back as soon as he could because that was a lot of money for us in our current situation.  I remember seeing the look of silent horror in the Mexican woman’s eyes to his left as we were giving this stranger a wad of money moments after meeting him.  We exchanged information and never saw or heard from this man again.  The decision was like trying to grab a double-edged sword.  It was either helping someone out who really might be in a bad situation or giving up on the decency of humanity and saying “sorry pal, good luck”.  In the end we got ripped off and now the next poor bloke that is stuck in a hard spot will have to figure it out on their own, unfortunately.  A lesson that I’ve heard many times before was learned, at a price of 1000 pesos of course.

12 thoughts on “Yucatan, the other Mexico: Campeche and Vallodolid”