Yucatan, the other Mexico: Cancun and Isla Mujeres 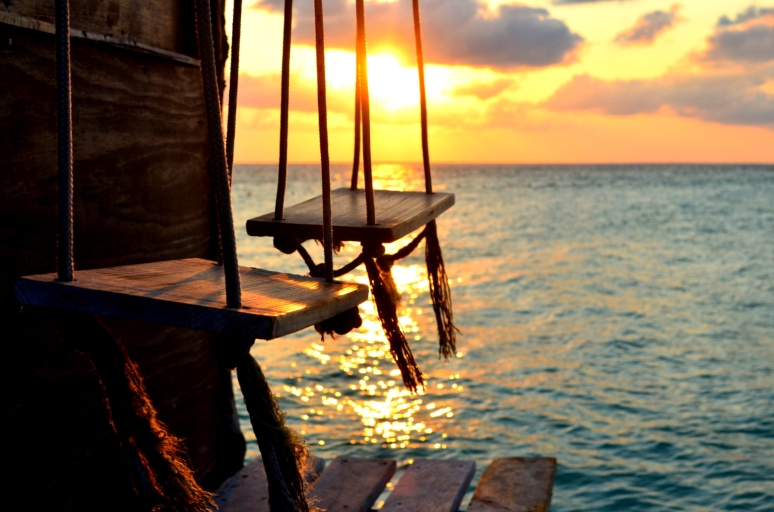 First I would like to explain exactly why we ended up in Cancun.  It wasn’t for the beaches, the champagne sand, the world renowned alcoholic free-for-all scene, or to hang with the endless stream of tourists nestled way up high in their all-inclusive hotel packages in resorts that were as attractive to my senses as a Mexican landfill set to broil under the steamy Yucatan sun.  We were intentionally going to use Cancun, to take her out on a date solely for her connections and drop her off curbside without the intentions of ever calling her back.  It wasn’t going to be a cheap date, but we were trying to check something off the bucket list and she had the right people.  The allure of Cuba was too much for us to pass up and we needed to book a flight without using my credit card (paper trail). The plan was to pay for tickets in hot, damp Mexican pesos.  Shortly after we pulled into the bus station we met a stranger eating a fish sandwich on the sidewalk who kept mumbling to us in English about where the cheapest hostel for backpackers was.  This man led us past puma stores, hordes of overpriced travel agencies, money exchange booths, and chinese food shops and within five minutes we found ourselves being introduced to Dudeman.  Dudeman was about 25 years old and ran the hostel like a 25 year old would.  Dudeman was bearing no shirt, a distinguishable American accent, and hair that was about Axle Rose length.  He immediately tried to “entice” us with tequila jenga night followed by an open-bar pool party for only 45 American dollars later that evening.  We acknowledged his precious offer and asked what time the herd was leaving for said party so we knew when to safely return to the hostel for sleep.  Normally we wouldn’t put ourselves in a situation like this but we were promised that this was a hostel and sleep was a priority.  Dudeman also stated that he could set up our Cuba trip at a better price than anyone in town could do it for.  We told him to get his agent on the horn and give us a price and then we didn’t see Dudeman until the following afternoon.  The events that happened in between our interactions were horrifying for two tired travelers.  Upon returning from the pool party at around 3AM the light was turned on and off for about 45 minutes in our 12 bed dorm while drunk party assclowns attempted to get ready for bed.  Since our other bed was a blow up mattress on the floor we shared a twin bunk right next to the AC so I naturally froze my ass off.  Another ass to add to the story was Dudeman’s managing partner, who kept us awake by having sex against our window at 4AM.  By the morning our weary, burning eyes needed to get the hell out of Cancun.  Fact; no pictures of Cancun exist on my camera. 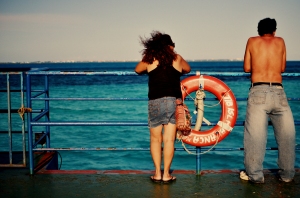 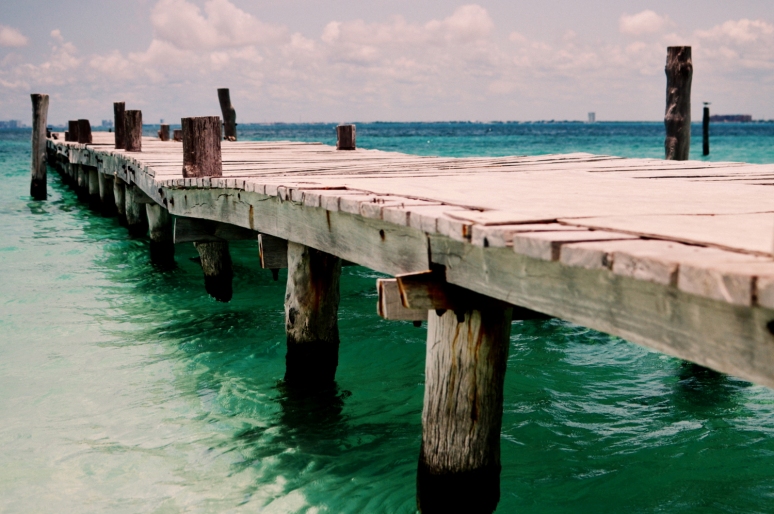 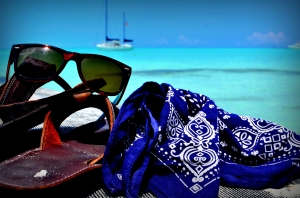 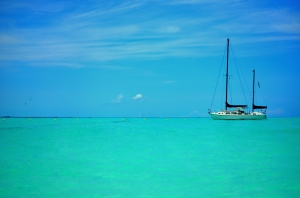 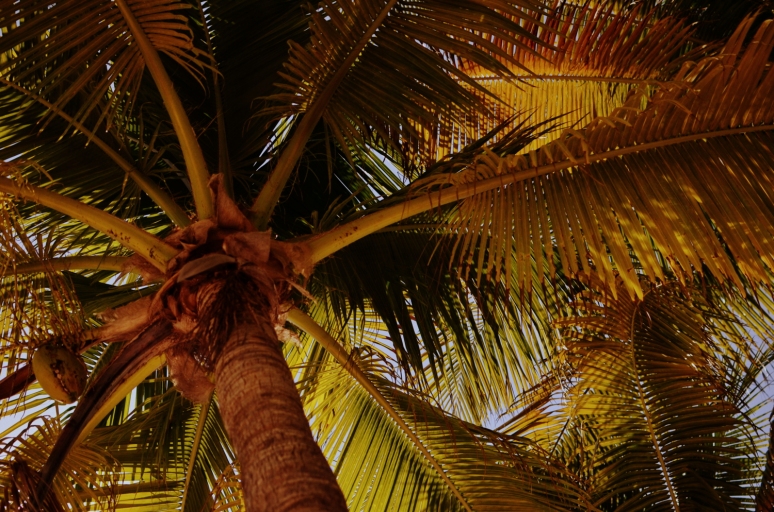 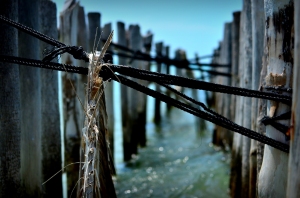 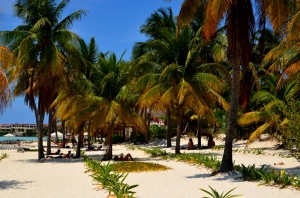 The following morning we flipped a coin on the whole Cuba project.  It was looking more and more like all the efforts we were putting into getting there were not paying off and we were in a very foul mood from the realities of the “paradise” in perhaps one of the most developed beaches on the planet.  Heads for Cuba, tails to move along.  We were both not surprised when tails came up and we decided to spend a few days in Isla Mujeres to regain our balance.  Isla Mujeres is the furthest point east in Mexico and also where the sun’s first rays touch the country just moments before they have to squint at the blight of Cancun.  After a 45 minute ferry ride we stepped off into the slower, much more relaxed pace of island living, leaving behind buses and SUV’s for golf carts and scooters.  We located a cheap hotel during reconstruction and scored a private room for cheaper than our hostel was in Cancun.  It was located on the main walking strip (Hidalgo) lined with tourist eateries, shops, and tours.  Don’t get me wrong, this island’s existence seems to have shifted from a small local economy to a tourist driven system, but on a much smaller scale.  It was easy and refreshing to walk around here for some reason.  It didn’t have any real feel or signs of Mexico but the shock wave that Cancun sent through our veins made this place seem, well, very pleasant.  The only annoying thing about his place was the constant barrage of offers of “do you want to swim with the dolphins??” and the constant barrage of purveyors trying to lure you into their expensive restaurants.   Other than that this island offered white champagne sands, that classic warm turquoise Caribbean water, and nothing but relaxation to forget about whatever it is that’s troubling you.  Our first night we ordered a pork chop dish from a little restaurant called Freddies and both agreed that we have never had a better pork chop in our lives.  The food, while pricey, was absolutely amazing here.  After a few days we finally found a local restaurant run out of someone’s house that served up great, affordable Mexican food.  And since our hotel owner gave us our own private mini fridge we could offset the costs a little more comfortably. 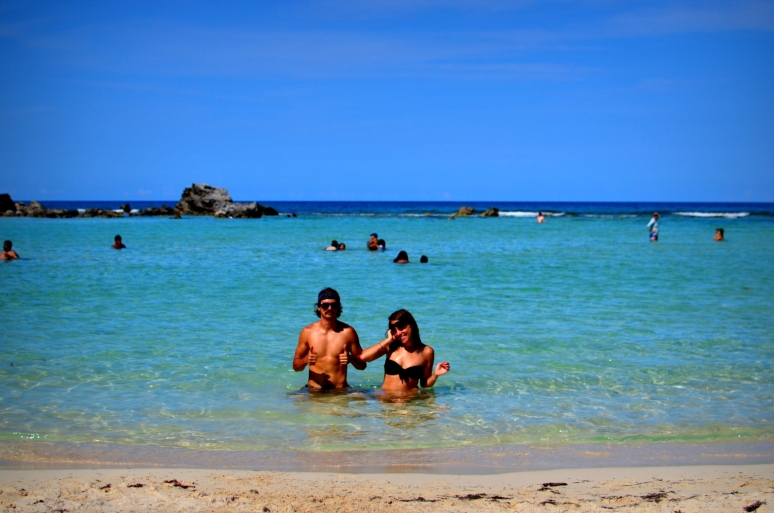 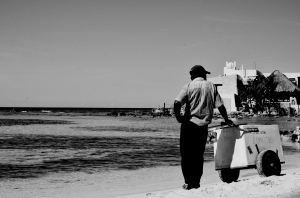 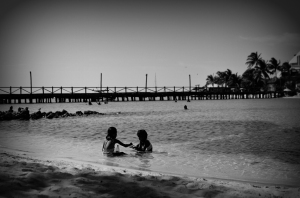 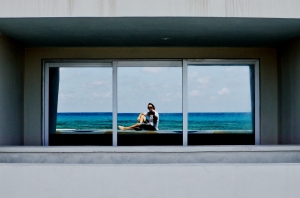 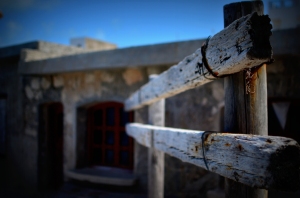 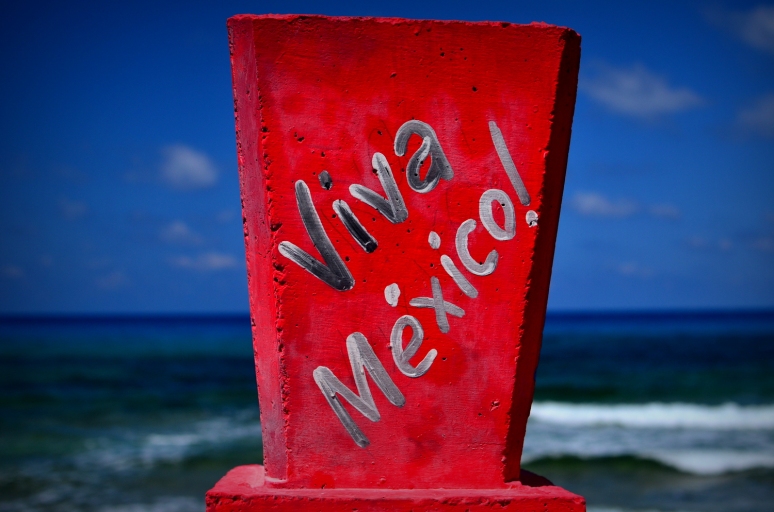 We spent 5 days playing around in the water, swimming in the shallow reefs, and getting some much needed sunsets burned into our cerebrums.  We couldn’t resist hiring a scooter for a day so we could actually see the other ¾’s of the 8KM long island.  We cruised around to get a feel for how the locals live life outside of the tourist strip.  We stumbled upon a small hand built wooden home that was plunked on a tiny island in the lagoon forcing us to stop for a closer inspection.  A woman there explained that it was her friend’s home, a completely man-made island comprised entirely of recycled plastic bottles.  I’ve heard of this guy before and was amazed that I was seeing this in person.  After creating the plastic floatilla footing he brought on sand, planted mangrove trees, uses solar and wind power as a supplementary power source, and even houses people for a cheap rate.  He wasn’t home at the time or we may have found our new shelter.  The small villages in the middle of the island offered a fresh sense of what it’s like to grow up on this little chunk of limestone.  We circled around for a while and found a church with about 300 plastic chairs outside in the parking lot across the road for an outdoor service that night and cruised through neighborhoods watching people go about their day-to-days until it was time to return our sweet whip. 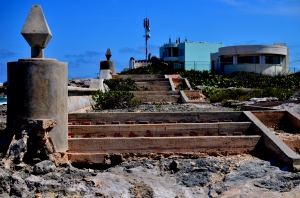 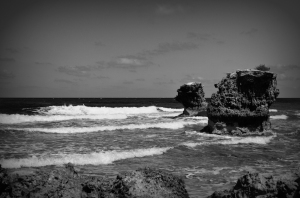 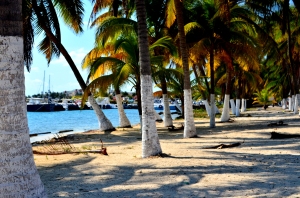 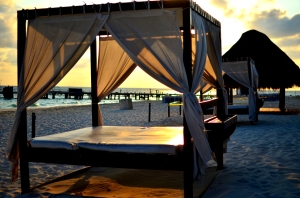 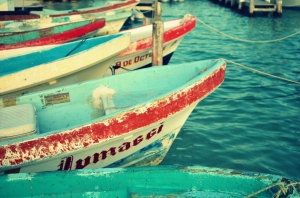 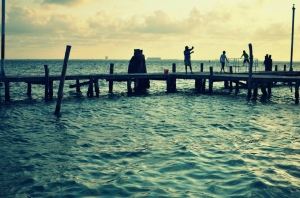 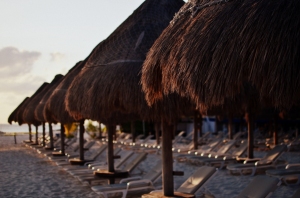 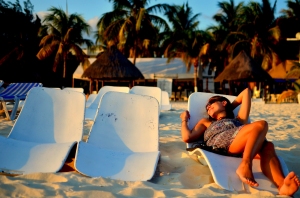 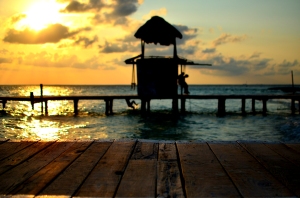 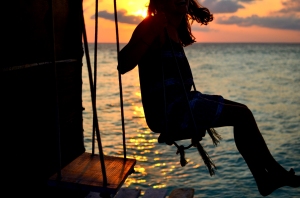 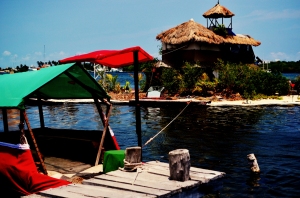 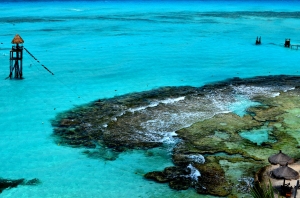 As fate would have it we stumbled upon a travel agency claiming they had the cheapest flight packages to Cuba.  We immediately went in to go over the details of the package and see if it truly was the best value around.  In total, with everything included, we figured out that we would be saving about 80-90 bucks booking through them vs. the best price Dudeman could muster up back in tropical hell.  Our lady claimed that she could have us on a plane in 2 days at cruising altitude to the forbidden pearl of the south.  We now had a new coin to flip and let fate decide if 100$ was going to change our minds. 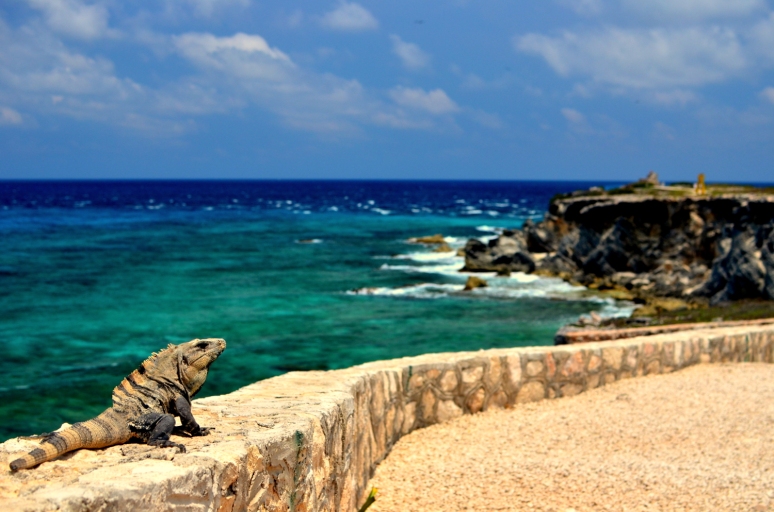 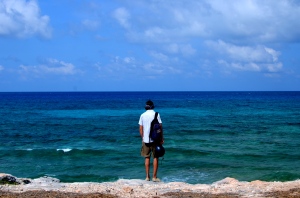 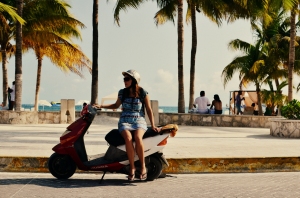 12 thoughts on “Yucatan, the other Mexico: Cancun and Isla Mujeres”