A 5:15 AM school bus pick up at our finca eco-hostal brought back to the ferry dock just in time for departure, naturally.   Our nerves were a little shot from lack of sleep, mainly because of jungle bugs that were biting us in bed.  Any real or fabricated touch of the skin at night would snap me out of sleep, looking for the flashlight.  But I digress, a lot.  Another rough and rocking skip across the lake and we were off.

We hopped on the first bus leaving to the fronterra.   This bus dropped us off in the depths of the mercado-ish metal shacks that line the Pan American highway where Nicaragua and Costa Rica meet.  Prior reading let us in to the fact that the touts help assist you through the border crossing for a dollar, but are not necessary to pass.  Confusion about procedures can grab the best of your judgement at times, but we had been crossing all borders by foot for months and stuck with our instincts.  Had we paid for the assistance we would have saved us about 10 minutes of confusion.  The migration office was a little out of the way and we wound up paying the money saved for a pedi cab ride that was beyond unnecessary.  We knew the moment we were in Costa Rica because the buses were real and cost a hell of a lot more. 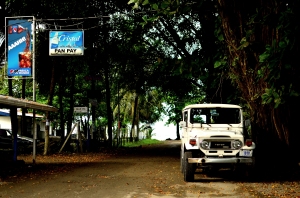 Since we didn’t have time for a transfer in San Jose our plan of an Ometepe to the Caribbean coast plan was kicked to the curb.  The funny thing about San Jose was that it was incredibly sketchy and nobody ever knew the names of streets they used daily.   Using a tried and commonly untrue lonely planet map we quickly found ourselves disoriented.  I walked into a smoothy shop and asked what street the business was on and got two “don’t know” responses.  We eventually went back to a hostel Elissa previously stayed at 3 years prior (Hostal Planet), and settled in for a night.  Our hostel was full of adventure tourists taking advantage of all of the 10 tours the hostel conveniently offered at enormously inflated prices.  Very accommodating  and modern, English was almost mandatory.

The next morning we walked to the bus station, which naturally was much further than we imagined, and headed off towards Puerto Viejo.  Elissa’s fond memories of this beach and fishing town from years ago sounded like a good place to crash for few days, which is all we really had.  Simply strolling around was an acceptable behavior in this laid back surfing town, with a few offerings of foriegn cuisine luring us in.  When we rode into town the bubble of yesteryear popped into expensive housing, expensive food, and an overall eruption in tourism.  Places were fully booked, rooms were close to 40 bucks a night, and not worth half that in accordance with comforts and livability.  We found a bed for 20 bucks in a dormitory that had a very basic kitchen.  Mosquitoes were also everywhere, and attacked at an unprecedented rate. 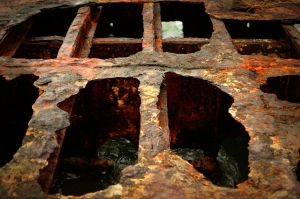 The simple pace of the slow life of the coast still existed, it was just draped in a tourist bulls eye cloth that uglied it up a bit.  Every piece of main property fronting the main road was turned into a surf clothing shop, bar, discotek, an ex-pat restaurant, a place to sell hippy jewerly, pipes, rent bikes, or a bank.  There were three large grocery stores supporting the little village with overpriced food.  We did our best to not spend 10$ getting some fruit, veggies, and yogurt.  Meals at restaurants, even the local platos called casados, set us back a minimum of 6 bucks.  This may not sound like a lot of money, but for extended traveling simple pleasures like that will drain your bank one bite at a time.  The beaches were still there, but the memory had vanished.

From an outsider’s perspective, when I looked around this tourism-took-over town I saw complacency mixed with melancholy.   Sure, a lot of people were taking advantage of the opportunity for a healthy stream of income, but to me they didn’t generally look or feel happy about the influx of gringos using their town as a mode to fulfill to their wants and desires.   When we asked for a slight discount for multiple nights it was generally met with a no, even with an empty house behind them.  To me this village felt like a good example for a case study about how tourism can totally change the face of a place.   The “pura vida” way of life led itself into a laissez faire approach to preserving a piece of what it surely must have had.  Puerto Viejo today is completely geared to please the outsiders, which to me feels like it siphoned out the pleasantness of their once quiet, family beach town life.  Fishing is still alive and well, but little else is, culturally. 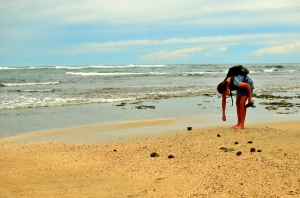 In our attempt to escape we rented bicycles for one day with our sights set on the furthest beach away.  Moments outside of town we found ourselves in the thick of a jungle rainforest.  The memories came trickling back in, until the first big, brand new Pete’s Texas Steakhouse restaraunt popped up, only moments later.  Thick stretches of rainforests had vanished, broken apart here and there by spa’s, chocolateers, cuisine, retreats, hotels, and “plot for sale” signs.  It looked as if the wild jungle between villages were slowly being parceled out for developmental dreams.  We raced past the first beach, which was rough surf break waters with sun bathers lounging around.  The further we got from the epicenter, the quieter the rumbling became.  The next beach was a few years behind the swell that was approaching.   The tourism wave hadn’t reached it yet.  The rain became more and more steady as we biked down a sandy path towards what must have been the end of the road.  By the time we got there it was fully pouring down.

We wound up seeking shelter in a friendly local’s coconut stand for several hours.  They offered up some great conversation and fresh coconuts for a dollar.  The tall, young afro-carrib was drinking a little vodka behind the booth, riding out the storm in good spirits.  Another man was with him wearing a bright reflector vest for some odd reason.  He spoke of his love for classic rock and roll, and smoking marijuana.  The rain came down from voraciously dark clouds and turned the ocean into a shattered surface of water, taking the full brunt of a constant barrage of kamakaze droplets.  We waited it out until the conditions permitted a decision to start heading back.  We said goodbye forever, and road our bikes past stretches of jungle turning into housing, but still with howler monkeys and jungle insects providing a natural soundtrack. 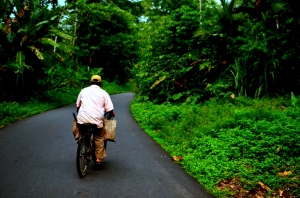 Our time spent in Puerto Viejo was not spent in vain. We did enjoy ourselves and the memories we made there, some of which were in depth conversations about perspective, life, and understanding others in a better light.  There were plenty of stimuli for taking your thoughts elsewhere in order to make yourself more comfortable.  For some reason the scene brought us on another wavelength of life.  Higher thoughts were had.  We chose Puerto Viejo as our one and only real destination because of it’s close proximity to the Panamanian border crossing near Bocas del Toro.

Costa Rica is surely a country that I’m certain has beautiful things to offer.  In fact, I know it is.  It has the highest Human Development Index in Latin America and completely abolished it’s national army in 1949.  The government has also gone to some great lengths to make sure beautiful places stay beautiful, to protect it’s natural resources for years to come.  Beach towns seem to be progressing towards cleaner futures as well, in leiu of the exorbitant amount of construction and development taking place.   The jungle and national parks are supposed to be in great shape and highly protected, but I couldn’t tell you that firsthand.

For our visit, we couldn’t justify spending a decent chunk of our overall budget seeing what is there.  Transportation was nice but not cheap.  Hostels and hotels were more than we’d seen since being in Havana, Cuba.  I met a Costa Rican in Panama who left because of being out priced back home.  Many travelers are spending only a few weeks in Costa Rica and have vacation budgets, which I believe results in continual price inflation.  American tourists comprise the largest group of tourists at about 38% in this highly visited country of the Caribbean basin.  It out priced our budgetary constraints and will only go up from there with time.  For budget backpackers it’s not really a place to explore in great depth.  But it was fun to dip our toes into the mix and see some of it for ourselves.

13 thoughts on “All of Costa Rica in one convenient post”