Costeno Beach: Not Your Typical Trip to Tayrona Park 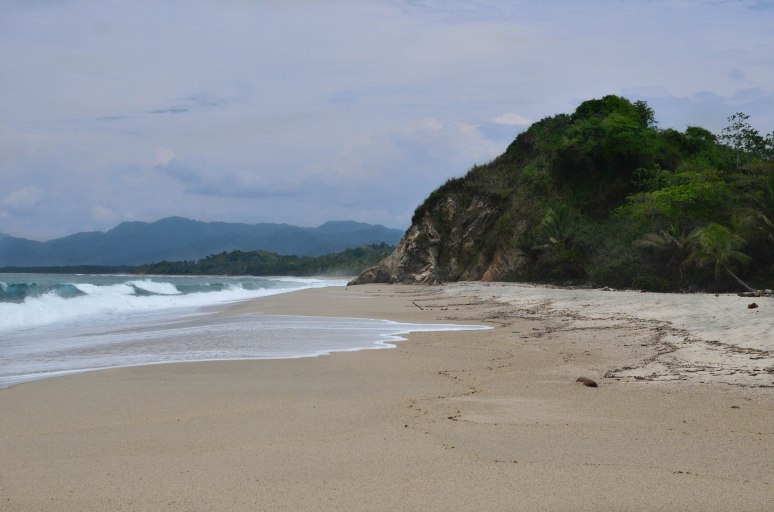 Trekkers that find themselves in the Santa Marta and Taganga area of Colombia will almost always end up visiting the famed and gorgeous Tayrona Park.  Located just 30 kilometers north of Santa Marta, this protected national park is comprised of miles upon miles of beaches with remarkable geologic features jutting out into the ocean, forests teeming with exotic wildlife ranging from jaguars to birds and monkeys, and in places is still inhabited by indigenous Koguis, who are direct descendents from the Tayrona Tribes that used to inundate the land.  From the few pictures that we found of the park we knew without a doubt we had to see it for ourselves.  The only hiccup was the 36,500 CUP entrance fee for foreign visitors, or roughly 40 bucks for the both of us.  We had also heard tales of how pricey food and accommodations might be, and we foreshadowed how such added costs could sum up quickly.  We had heard about an alternative while in Cartagena that allowed you to visit the area without having to pay the rather large (for us) entrance fee, but still enjoy some of the beauty that the pristine coastline had to offer.   We took a taxi to the corner of Calle 11 and Carrera 11 in Santa Marta and grabbed a bus destined for Costeno Beach. 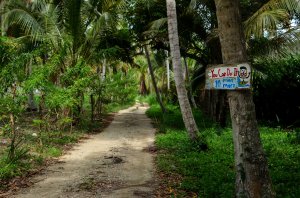 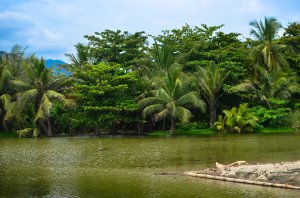 We were dropped off roadside at a dusty driveway that disappeared beyond a banana farm and into the forest towards the water.  I remember how hot and sunny it was that day, mainly because I was carrying the big backpack with our combined belongings.  We walked through the forest and followed the two wheel tracks until we reached a surreal, palm tree haven by the water.  Huge, empty estate houses appeared to be slowly decaying in the salty breeze and filtered shade of the trees.  The thick, humid air ensured total saturation of my clothes.  I dreamt that the entrance of the surf camp would suddenly appear and save us from the heat.  It felt like miles of palm tree forests had past before we finally found the entrance sign to the camp. 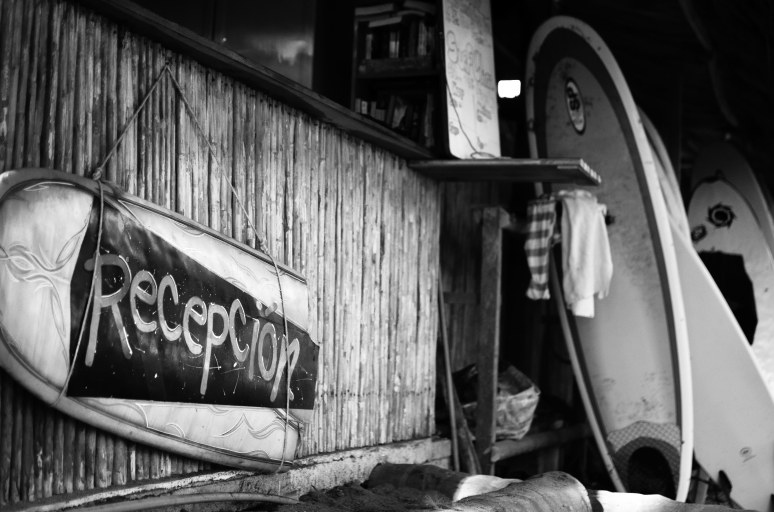 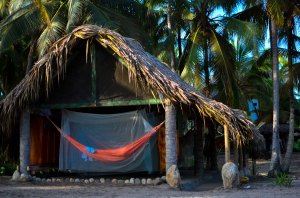 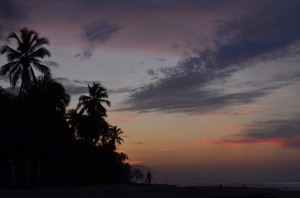 Costeno Beach Surf Camp was started by a couple of guys from Canada who fell in love with Colombia while chasing her waves years ago.  It is comprised of several structures built from bamboo and other wood and topped off with palm tree branches.  This is a classic and ubiquitous building style throughout Latin America where these basic materials are readily available.  There are several outdoor bathrooms including the typical Colombian “exposed urinal”, which is a urinal without any sort of door for privacy.  I personally really dig them.  Water appeared to be collected in rain tanks and also pumped from the ground to provide working showers and facilitate cooking.  Private huts with mattresses were located behind the kitchen/reception building along with a roofed hammock shack for beach bums like us.  We reserved hammocks for 12,000 CUP a night and it would be the first time on our trip that we were going to sleep hanging above the ground.  Coconuts fell from the sky nightly with a muffled “thud” that was audible from across the camp, and those that desired fresh water from them could take a swing with the machete provided near the campers’ kitchen. Dinner was served at 7PM every night in a big, family style fashion complete with a cowbell announcing it’s arrival. 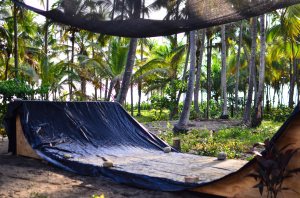 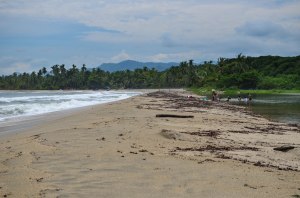 This camp was designed and set up for surfers and catered to them as such.  The young, shirtless proprietors offered daily lessons and board rentals for those that wanted to rip some rope in the precariously inviting currents. 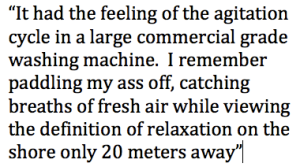 The power of the waves was visible in the daily chaos it left on the beach.  Huge trees, obliterated branches, and pulverized coconuts could be seen for miles in each direction.  They doled out lots of warnings to weak swimmers about the dangers of the waves here, and several Colombians told us before setting off to stay out of the water.  This, of course, always makes me want to go in even more.   The waves were small to medium sized (I’m not surfer, just observing) when we were there, and I found out from one of the guys running the camp that they have some good swells in different parts of the year.  Swimming proved to be an enduring workout to say the least.  The current swept you northwesterly down the beach no matter how hard you tried to fight the currents.  Waves toppled over you and slammed you into the coarse grained sandy shelf if you didn’t pay attention.  It had the feeling of the agitation cycle in a large commercial grade washing machine.  I remember paddling my ass off, catching breaths of fresh air while viewing the definition of relaxation on the shore only 20 meters away.  Girls and guys laying in the sun, reading books, swilling cervezas while I clung on to the delicate threads of life.  For some strange reason, I enjoyed this game and it became my morning, noon, and nightly routine. 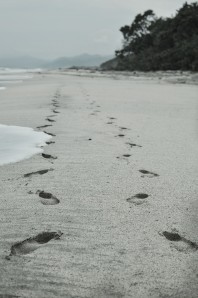 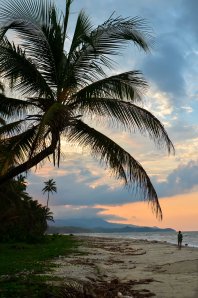 Bonfires were an evening affair at the camp.  Hammocks surrounded the fire pit that was fed through the efforts of those that wanted to watch things burn.  Sand flies were rampant by the pit, and were visibly torturing anyone who forgot to protect their lower extremities accordingly.  When we arrived at the camp I remember seeing a young lad from England’s back that appeared to have a case of the chicken pox from the devilish beings.  We chose to lather ourselves in a concoction of baby oil infused with a soap that naturally repels mosquitoes and other things that love to bite. 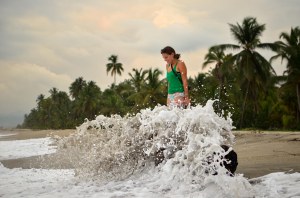 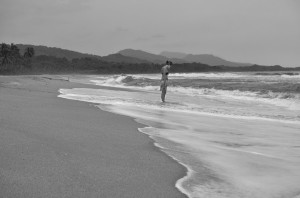 This part of the Colombia coastline has a very unique feature that adds yet another appeal to it’s already insanely ubiquitous beauty; this is the closest place on the earth where snow capped peaks live next to the ocean.  On most mornings before 9 AM it is possible to walk along the beach and see the peaks of the Sierra Nevada de Santa Marta mountain ranges through palm tree leaves.  Surfers there claimed it was one of the most enchanting surfing experiences looking at the gorgeous natural backdrop while riding waves.  One morning we took a long walk easterly down the beach in total isolation from any living soul until we found that gorgeous scene I described above. 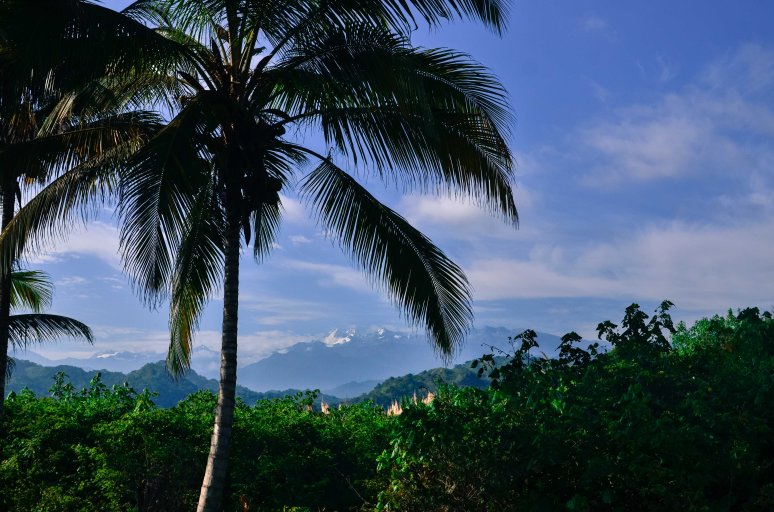 Since the camp was located just east of the boundaries of Tayrona Park, we decided to wander until we found its outskirts one morning.  We took off our sandals and walked in the loose sand for miles.  Along the way we came across a small river channel occupied by Colombians 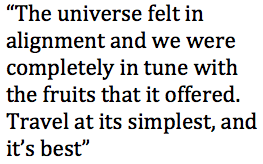 swimming and playing in the still, cool waters.  The backdrop was thickly forested land that rose up into mountains.  On the other side of the sand barrier the churn of the ocean was putting out some serious intimidation vibes, pounding the shore in a thunderous fashion.  A small fishing village appeared and gave us a taste of real life on the shore.  Boats filled with nets sat perched at the top of the sandy shelf while shacks sat under the cover of palm trees.  Fish that were not part of the daily trade were left in a pile for the carnivorous birds to pick apart.  After the village there was nothing but the sound of the waves and the winds for what seemed like forever.  Once in a while a small resort was encountered.  We walked into one to use its outdoor showers and wound up playing in it’s inviting freshwater pools for a while.  But we pressed on.  The loose sand was beginning to take its toll on our legs, but the headlands that separated the land from the park appeared to be a reachable goal.  Houses became sparser and eventually disappeared.  The smooth rock reaching out of the land and towards the sea stood in front of us and beckoned us to go in. 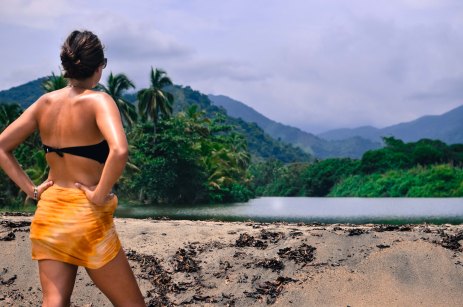 We had to wait until the right moment to make a dash around the receding waves that would no doubt get us completely engulfed in salt water.  Once we walked around the physical barrier the beach opened up into a wide bay of sorts.  This was no doubt part of the park.  It took a little over 2 hours of constant walking to find this gorgeously hidden cove, but it was worth every effort.  A fisherman and his son could be seen in the near distance, throwing out a hand line into the surf.  Our tired bodies retired on the sand while my eyes and mind took everything in.  The universe felt in alignment and we were completely in tune with the fruits that it offered.  Travel at its simplest, and it’s best. 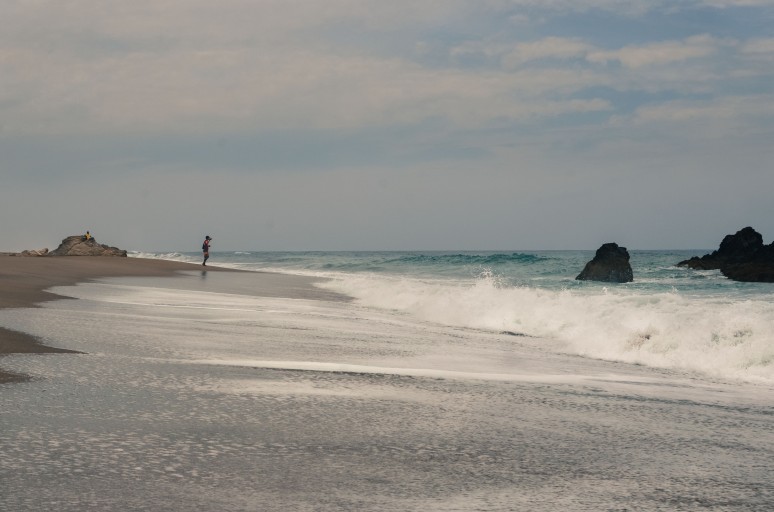 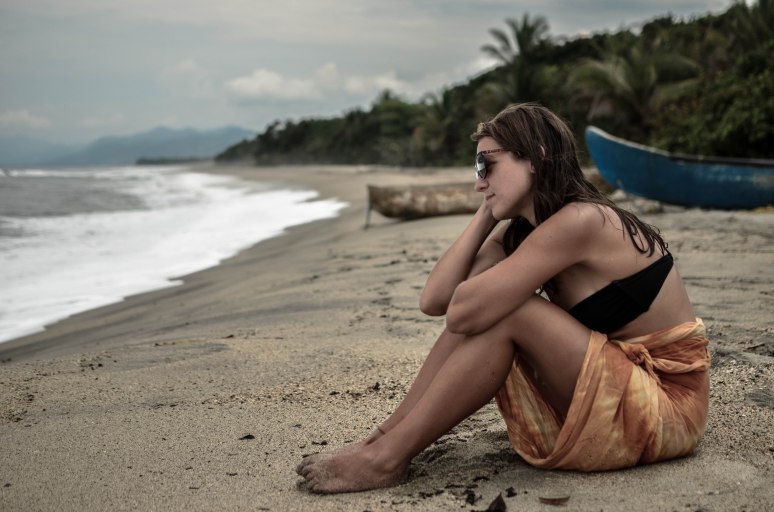 The day before we left I got to play with the mini ramp.  One thing that had been missing from the entirety of the trip was my companion of 15 years; my skateboard.  One of the surfers let me use his board and I got to skateboard in the middle of a tropical jungle, which is something that I never could have imagined I’d be doing.  Costeno Beach surf camp could just be another ordinary place to surf, relax, and spend some of your life.  Or it could be another magical stop on your journey that takes a place in your mind forever.  That is completely up to you.  But I would say it’s definitely worth a visit. 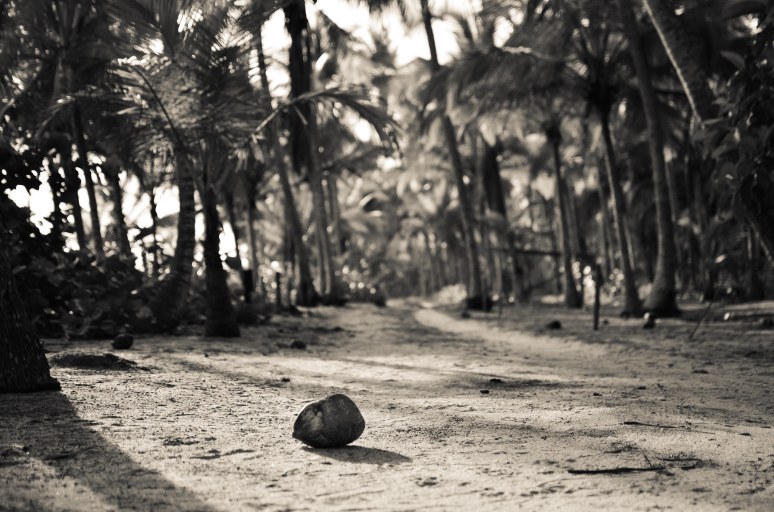 To get there from Santa Marta, take the bus to Tayrona Park at the corner of Calle 11 and Carerra 11.  Tell the bus driver you want to get to Costeno Beach, which is about 15 minutes or so past the entrance.  From there you can walk down the path towards the beach for about 30-45 minutes, following the path to the right when you get within sight of the water.  You can’t miss the camp on the left hand side.  Enjoy it!

13 thoughts on “Costeno Beach: Not Your Typical Trip to Tayrona Park”