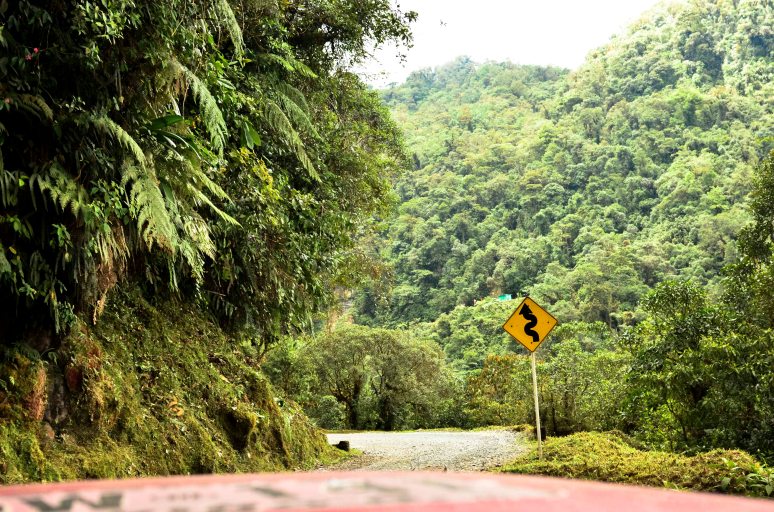 Our haggling with the collectivo driver may have cost me my boots.  This was the only time in the trip where one of my possessions, albeit one of the most important pieces of equipment, disappeared from my sight.  I had made the mistake of tying my hiking boots to my backpack in the parking lot of the mercado in Mocoa, forgetting the golden rule of traveling in the developing world: keep your gear locked up or on your body.  The price the driver started off with was a bit elevated, as expected, and Ilse was determined to pay the real price for the 6 hour trip between Mocoa and our destination.  Eventually the driver gave in and we tossed our gear on the roof of the truck, leaving his ayudante to secure our packs without any supervision.  We had about 30 minutes to kill prior to departure and spent it wandering around the mercado.  That’s when my boots disappeared from my bag. 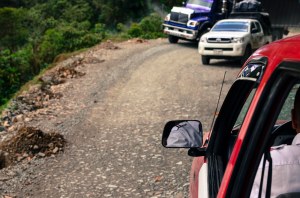 When our truck was ready to take off, they packed us three backpackers in the bed of the pickup truck. It was equipped with hand crafted with wooden benches, a metal frame, and a zippered thick tarp that covered us from elements for the long journey ahead.  We took off, leaving a dusty mercado behind us.  In front of our pickup truck was a meandering asphalt path ascending into the massive monolith ahead, disappearing and reappearing through the thick green canopy of the mountains.   The path we were going on was coined “El Trampolina de la Muerte”, which translates to “The Trampoline of Death”.  This road, much like Bolivia’s famed “Death Road”, is known for it’s perilous plunges on a path cut wide enough for one vehicle in more places than most would care to see. Add to the equation extremely thick, foggy conditions, full sized Colombian tour buses packed with passengers, and boomerang bends shored up by stakes with yellow “caucion” tape alongside the contours of jagged, southern Colombian mountain passes. All of these elements equate to a memorable ride at the very least.

The journey started on paved roads rose gently up into the green vegetation of the lush mountain rainforest with lazy turns and beautiful views.  Eventually the pavement came to an end and was replaced by gravel padding the path between us and our destination.  The temperature began to drop as we climbed higher into the mountains, and road signs began to warn us that the fun parts lay ahead. True to it’s name, the road became disconcertingly narrow, with blind sided turns exposing 2 way traffic on roads built for one. Our brakes slammed on the loose gravel without warning, bringing our truck to a sliding halt every time another vehicle’s nose appeared around a tight corner.  There were several instances where I was genuinely afraid that we were going to have a fender bender, or worse. The area was becoming extremely remote, with just the occasional structure or half stocked bodega on a pull off every 20 minutes or so.  The fog collected in an extremely thick grey blanket, limiting our field of vision ahead of our steel chariot. The vertical bedrock walls were decorated with hundreds of makeshift memorials along this honest road.  Each elaborate cross was probably made from someone’s relatives or lovers, and each shiny plaque was a sobering reminder of our own mortality.  Much like other situations we’ve been in, a sense of trust that all things were going to work out was in our pickup truck that day, and we knew would get to where we needed to go.

When we made it through the pass and began descending into the valleys an overwhelming sense of peace remained throughout my body and mind.  There was nothing but smooth, worn pavement weaving down through the mountain valleys.  The sun would break apart the clouds exposing villages tucked into the liveable areas of the green, jagged landscape.  After a brief set lunch and a few more stops we arrived in La Laguna de la Cocha.  We jumped off the truck, grabbed our bags, and said adios to the truck that carried us across that stretch of land.  We found a family run hotel/guest house that would work for the night and immediately went to the lake to explore.  Wild chickens roamed on the side of the road in this sleepy, slow village.  Horse drawn hand made wooden carts were a normalcy for the locals, but for us the click-clack of the hooves and the gentle smile from the driver was a beautiful moment in time.  Small bakeries and restaurants kept their doors open for passers by, and rubber boots and large wooden handled steel hoes were common work attire. 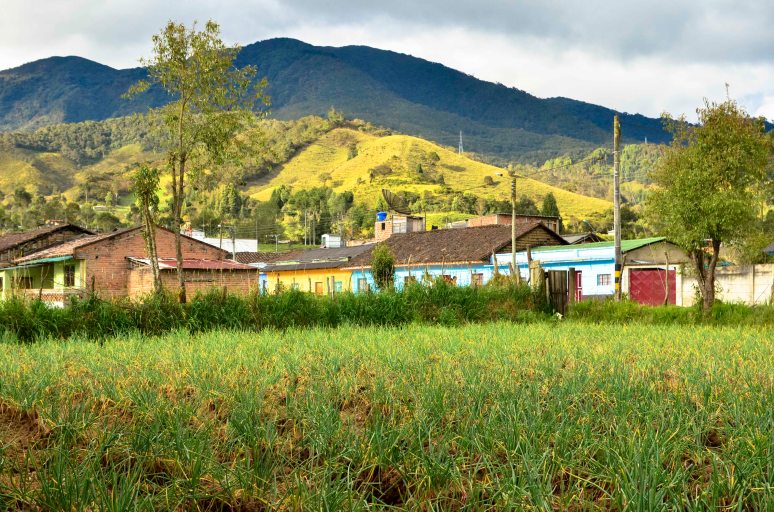 Green, grassy fields were kept company by cows nursing their calves and grazing at the same time.  We quickly came upon a wooden house that looked almost Swiss in design.  It’s multi colored coats of paint perfectly accentuated the European style architecture, and it’s balconies and hanging boxes were overflowing with beautiful flowers dripping down towards the ground.  A small, slow moving stream cut through the verdant ground,  reflecting a perfect image of the entire landscape on it’s surface. Chickens walked around in backyards casually pecking the ground for sustinence.  The imagery was over the top and charming at the same time. Ramshackle wooden houses almost smiled at us as we walked by, inviting us in on their secret to contentment.  The stream became dotted with dozens of hand made, brightly colored wooden boats, sitting calmly in the slow current.  Occasionally a simple wooden footbridge would cross the stream from the main road as an easement to the homes built on the quiet side of the water.  The wooden crafts became increasingly present as we got into town and before long there wasn’t an empty space along the banks of the stream for another boat to tie up to.  Restaurants, tourist shops, and tents selling handmade goods lined the main street of the village of this small, quaint alpine village. 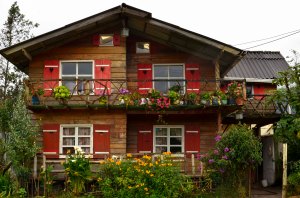 We joined another group of Colombian tourists in hiring a boat to take us around the lake, which made the trip feel more like a water collectivo ride than a private tour in every best way possible.  In all directions there were green hillsides and green mountains breathing in the cool, damp air that only a thunderstorm can leave behind. The only stop on the tour was Isla Corota, which is an island in the lake that Colombia’s smallest national park.  We followed our driver off the dock and straight towards the snack stand, where he ordered what I can only describe as a Colombian hot toddy.  These concoctions were puzzlingly delicious. The odd combination of aguardiente and passion fruit was so perfect that I couldn’t believe it tasted that good.  We each had a cup and then went directly into the chapel to view the alter.  It was lit up with neon blue lights and had a lot of detailed woodwork throughout, but was completely vacant at the time we were there.   The park itself was not allowing entry because it was too late in the day, so we didn’t get a chance to take a walk through the trails of the evergreen cloud forest. They are only found in areas shrouded with fog and mist, and this lake had just that. 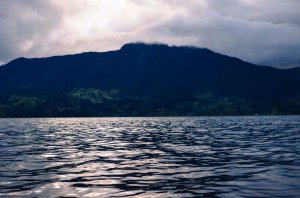 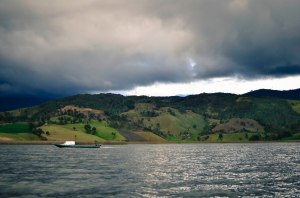 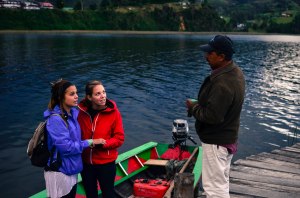 We hopped back on the boat and watched dark, ominous looking clouds oscillate in slow motion while the sun disappeared behind the mountaintops. There were small floating houses with long wooden docks alongside of a shallow reed area of the lake where fisherman farmed the lakes bounties.  The sun going behind the horizon was epic that night, and our boat slowly cruised back to the little town.  We hopped off, said farewell to our compadres, and grabbed trout dinners at what appeared to be the only restaurant open that night.  We had the place to ourselves, had a few cervezas, and listened to the pouring rain outside.  After dinner it became obvious that walking for 30 minutes in the rain was not an option, so we had to hire a moto to take us individually back to the hotel.  Tired and wet, we called it a night. It was one of those days that was longer than it felt but shorter than it was meant to be, and I wished we could have squeezed out another hour or two to satisfy my insatiable desire for hanging onto the feeling of truly being alive. 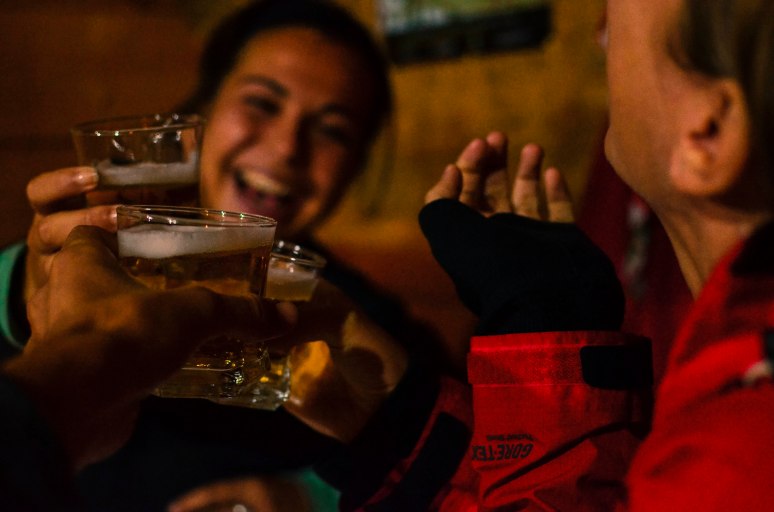 Ilse continued on her way to Ecuador early the next morning, so we bid our farewells.  Elissa and I decided to spend some more time exploring the little village, so we went back into town to soak in some more pretty colored buildings and see how the town operated during it’s daily routine.  Children were helping their parents with chores like chopping wood and bringing in the daily catch, because it seemed that school was not in session.  Boats groaned slowly past us while we peered into windows of supply shops, and seemingly abandoned houses.  Tables and chairs were set up waiting for the home owners to come back and wipe the dust off.  The town was quiet, still, and beautiful on another tranquil day.  We found a restaurant that appeared to be open, wandered inside, and made some noise until the owner appeared from behind a door where the living quarters were.  We had a private breakfast upstairs on a deck overlooking one of the streams that fed the lake and connected the town.  Pure bliss ensued.

After collecting ourselves and grabbing some snacks for the road, we hunted down a collectivo that would take us to our next hub of Pasto.  Like any travel in this part of the world, there was a transfer or two before we would get to where we needed to go. At this point, we were nearing our departure with Colombia, and the feeling was reminiscent of when you are preparing yourself to say goodbye to a good friend that you secretly hoped would be within a stone’s throw away from wherever you were for the rest of time.  The road continued on as the landscape swept past the open windows of our crammed little car.  Colombian music fell out of the tired speakers, and we cruised further south towards Pasto.  We had one more night before we committed to our eminent departure.

10 thoughts on “Colombia’s Most Dangerous Road Leads to One of it’s Most Charming Towns: La Laguna de la Cocha”